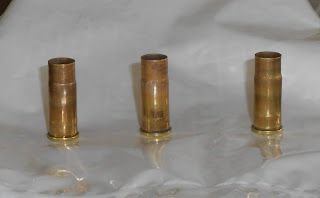 Have a friend who does cowboy gunfights, who has an old .32 Short breaktop revolver he carries in a chest rig.  Looks very nice, but the amount of powder that would fit didn't give much of a bang, and he wondered if you could take a .32 Long case(which is about the length of a loaded Short cartridge) and neck it down so it'd fit in the Short chambers.

He'd thought a .30 Carbine sizing die might do it; nope, not nearly small enough.  I'd thought maybe a .25acp die, but don't have one, or know anyone who does.  Finally decided to try something:
Take the cylinder out of a .32 Short.
Anneal the front half of the case(that Tempilstik is coming in handy).
Run the cases into a .32 seating/crimp die to put as much crimp as possible in the mouth.
That turned out to be the real key: it made the mouth small enough(barely) that you could put the case(lubed) in the chamber and tap it in with a mallet.  In about halfway, pull out and turn a bit, then tap in the rest of the way, then pop out.

I tried the first one without annealing; trust me, it's much easier with.  And they pop right out by pushing the extractor rod, no sticking.