The case for ugly guns and big magazines

LIBRELLE:  Anyway – you can not show me a reason anyone needs a…what?  High-capacity “magazine”?
ME:  No, I can’t show you one.
LIBRELLE:  I knew it.
ME:  I can show you several. Here’s one;
The whole piece is good.
Won't work on people determined to stay a hoplophobe or gun bigot, but it'll at least annoy hell out of them.


Mr. Hofmann points out to the gun bigots- again-
People don't buy expensive (especially expensive now) gear just to have something to turn over to Feinstein when she finally gets to say, "Mr. and Mrs. America, turn them all in." The kind of American most likely to want AR-15s tends also to be the type least eager to register them with the government--particularly not a government agency as historically hostile to private gun ownership as is the BATFE (our "most hated federal agency," before "Project Gunwalker").

In other words, Feinstein proposes to make millions of new "gun criminals" out of decent Americans. So be it. How does she intend to arrest us, and whom does she propose do the arresting?
I like the image too: 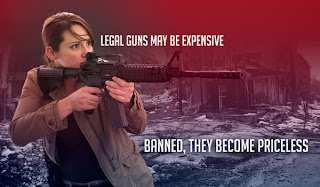 Being on this heading this morning, something else worth reading.  And which is probably causing some serious wetting of panties among the hoplophobes and socialists.


If you do business with Bank of America, you might want to look for another bank.


The Marine who wrote the letter to Feinstein saying 'No'?  As might be expected, the people who demand respectful speech are threatening him.


As noted: a disaster in an important part of the country is FAR more devastating than one in, say Louisiana.
And Harry Reid really is a slimy bastard, isn't he?


So you expected any kind of integrity from Gore?
Ominously missing was the creator of Current, the self proclaimed inventor of the Internet and savior of clean energy, Al Gore, although his partner, Joel Hyatt, stood proudly with the Al Jazeera honchos.

“Of course Al didn’t show up,” said one high placed Current staffer. “He has no credibility.

“He’s supposed to be the face of clean energy and just sold [the channel] to very big oil, the emir of Qatar! Current never even took big oil advertising—and Al Gore, that bulls***ter sells to the emir?”