10k rounds each of four brass and steel-case .223 rounds.


So Joe Biden’s telling me that Lanza, overcome by his mental condition to the point that he’s murdered his mother and is headed to an elementary school on a killing spree, is going to stop 1,000 yards from the playground and think, “Hey — I don’t want Obama to take away my student loan subsidy. I better keep these guns away from school!”
These are the thoughtful, well-reasoned ideas from the Obama brain trust?

And we haven’t even mentioned the fact that gun laws are utterly meaningless to criminals, anyway. Don’t believe me? Ask the families of the 506 people fatally shot in Obama’s “gun-controlled” hometown of Chicago last year.

I’m not one of the knee-jerk pro-gun types who oppose all laws. I don’t think of gun ownership as the highest form of patriotism. Show me a law on law-abiding gun owners that will have a meaningful impact on gun violence, and I’m all ears.

But that’s not what the White House is offering. In the face of undeniable evidence that, for 20 years, gun ownership rates have gone up while gun deaths have plunged (the lowest since at least 1981, according to FactCheck.org), Obama’s pushing for a large-scale “punish-all-gun-owners” approach.


Gee, why would we think these people dream of confiscation?  Oh yeah:
“We need to get them off the streets — illegally — and even if you have them, I think we need to start taking them,” Muhlbauer told the Daily Times Herald. “We can’t have those out there. Because if they’re out there they’re just going to get circulated around to the wrong people. Those guns should not be in the public’s hands. There are just too many guns.”

So if you on an old semi-auto .22 or shotgun or rifle, Muhlbauer has decided that you don't need that, can't be trusted with it, and the government should come for it.  And you, if you object.

One truly effed-up disaster response on the federal level, but hold Obama to the fire the way the media did Bush?
About as likely as me kissing Sarah Brady's ass.

From the Dutchman: Among the wonderful people on Biden's committee: 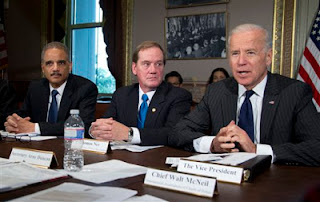 Sipsey Street has learned that a key member of the President's committee to find "the solution" to school shootings, has a son who was convicted of plotting a Columbine-style school massacre -- possibly with a service pistol obtained from his father. Nee is the former head of the Boston Police Patrolman's Association and is currently the head of the National Association of Police Organizations. In short, says one source familiar with the notoriously anti-firearm Nee, "he is a political hack/thug/activist who happens to carry a badge."

Sources point out that not mentioned in state-run media accounts of the Biden comission is that Thomas Nee's son was arrested and convicted for plotting a Columbine-style attack on Marshfield High School in Massachusetts. Additionally, says one source, "Joseph Nee might have armed himself at one point with his father's service pistol though that story went off the radar."

This source continued, "As usual, the 'solution' will be the attempted theft of freedoms from the innocent while the root causes of these evil shootings, especially dysfunctional parents will be ignored."

There are a ton of links out there re this story, here are a few.

Boston Police plan to contact authorities investigating the alleged Columbine-style attack plot at Marshfield High School to determine if a gun that one suspect allegedly showed to another student was a .40-caliber handgun issued by Boston Police.

A female student told Marshfield Police that Joseph T. Nee, one of the two suspects in the case, pulled what she thought was a black, .40-caliber handgun from his waistband as she was getting off a school bus this past spring and told her "how the school was going to be shot up," John P. McLaughlin, an assistant Plymouth district attorney, said at Nee's arraignment Monday.

Joseph Nee convicted; is dad part of the story?

The Associated Press thinks so. The Boston Globe doesn't. A bit of background: Joseph Nee was just convicted of conspiracy to commit murder for plotting a Columbine-style attack at Marshfield High School. Tom Nee, Joseph Nee's father, is the head of the Boston Police Patrolmen's Association.

You could make a reasonable case for either position. Tom Nee is a public figure, but the crime is his son's, not his.

That said, the Globe's current approach is especially interesting in light of this October 2004 article, which posited a strong link between Joseph Nee's legal troubles and his relationship with his father.

From COMMONWEALTH vs. JOSEPH NEE.

"In this case, the Commonwealth presented sufficient evidence to prove beyond a reasonable doubt that the defendant entered an agreement with Kerns with the intention to commit mass murder. See Commonwealth v. Frazier, supra. Multiple witnesses testified that the defendant either initiated or assisted in the development of an elaborate plan to "shoot up" the school. There was substantial evidence that the defendant prepared to carry out the attack by learning about and experimenting with explosive devices, and attempting to acquire firearms. Moreover, the defendant attempted to recruit Courchene and others to participate in the attack and threatened to cut out the tongue of anyone who spoke about the plan to the police. From this and other evidence, the judge could properly find that the defendant in fact reached an agreement with his friends to kill people at the school. See Commonwealth v. Benson, supra."

Well, I guess they were looking for "experts" in mass murder plots and found one close to home, although the Obama administration seems loathe to point that out.

In your first link, Boortz rather spoils his argument by flunking 5th grade math, not to mention demonstrating utter and complete ignorance of algebra.