Got to shoot a Coonan today;

that's one impressive piece. If you're not familiar with it, it's a .357 Magnum autoloader; this is like the one I shot 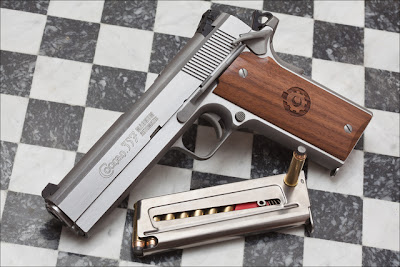 and a couple of pics of a fancy version here(this pic from Oleg Volk's site, too), and here's the specs from the Coonan site:

Shot beautifully. Offhand at ten yards I could keep shots in a 3" group, the trigger is light and clean. Yeah, there's recoil; no way you can have .357 power without it. It was controllable and consistent, so not really any problem. This was a brand-new pistol, first time at the range. I got to put about 35 rounds through, 25 were Remington 125-grain HP, the others handloads using a Remington 158-grain softpoint bullet. Total I saw fired was about 75 rounds, and it had one empty that failed to clear the ejection port, that was in the second mag; no other firing problems. Considering the makers say it should have a several-hundred round break-in, I'd say it's off to a good start.

I'd bet one of these pistols that the California Department of Justice Pistol Ownership OK for Peons list (POOP) doesn't include this pistol so we residents of California who are liberty-loving and desire to be safe amongst the hoodlums and thugs can't buy one.
But my father taught me to avoid sucker bets.