knew anything about it...
Dennis K. Burke, who as a lawyer for the Democrats on the Senate Judiciary Committee in the 1990s was a key player behind the enactment of the 1994 assault-weapons ban, and who then went on to become Arizona Gov. Janet Napolitano’s chief of staff, and a contributor to Barack Obama’s 2008 presidential primary campaign, and then a member of Obama's transition team focusing on border-enforcement issues, ended up in the Obama administration as the U.S. attorney in Arizona responsible for overseeing Operation Fast and Furious.
But Holder & Napolitano & Co. knew NOTHINK! 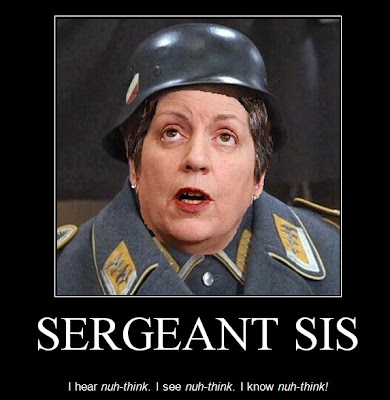 
Plus this:
In a Friday letter to the DOJ’s Inspector General Michael Horowitz, Grassley and Issa said they’re now concerned retaliation is much more likely following Thursday’s votes to hold Attorney General Eric Holder in criminal and civil contempt of Congress.

“We just learned that ATF senior management placed two of the main whistleblowers who have testified before Congress about Fast and Furious under the supervision of someone who vowed to retaliate against them,” they wrote before describing how senior political figures have made dangerous threats before.

Grassley and Issa said that in early 2011, right around the time Grassley first made public the whistleblowers’ allegations about Fast and Furious, Scot Thomasson – then the chief of the ATF’s Public Affairs Division – said, according to an eyewitness account: “We need to get whatever dirt we can on these guys [the whistleblowers] and take them down.”

Thomasson also allegedly said that: “All these whistleblowers have axes to grind. ATF needs to f—k these guys.”
Y'know, I do believe that such retaliation is a federal crime, is it not?

More still:
The two lead Fast and Furious investigators also released new, never-before-public documents that show officials in ATF’s Washington headquarters were trying to cover up Fast and Furious two weeks before Grassley ever even asked about it.

Grassley didn’t confront the Justice Department or ATF with those questions until Jan. 27, 2011, but ATF headquarters had prepped internal talking points as early as Jan. 12, 2011.

More still, the U of Baltimore School of Law better consider just what kind of slimeball they're getting to run the place:
Grassley and Issa released other internal documents, including emails, with their Friday letter to Horowitz. The documents show that soon-to-be-former Assistant Attorney General Ron Weich – who is resigning to lead the University of Baltimore School of Law – may have been in on this cover-up plan.

Weich was the author of a false Feb. 4, 2011 letter to Grassley, in which he denied – on behalf of Holder – gunwalking ever took place. Holder’s DOJ withdrew that letter 10 months later, in December 2011.

Weich and now former acting ATF director Ken Melson – who was promoted into DOJ leadership after he secretly deposed Congress without DOJ or ATF counsel – were cc-ed on emails from late January 2011.

Those emails discuss how the DOJ and ATF planned to respond to Grassley’s request for information.
Posted by Firehand at 09:11