Not only do they not approve of violence to protect against common criminals, 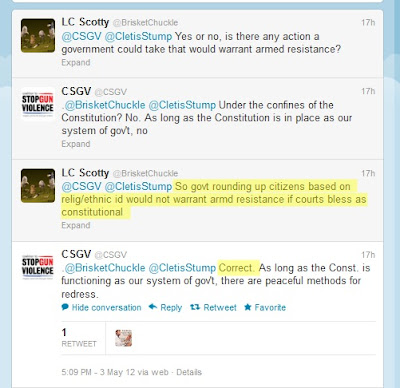 Bleep. Jumping Deities on pogo sticks. "Yes, if the court approves you can stick people of whatever color or religion or ethnic origin in camps and it's not allowable to use violence to oppose it." Bleep.
...This blog is full of screen captures of CSGV and its cronies advocating in sometimes less than crafty language for police raids, illegal executions, forceful internments into mental institutions and the disolution of families in the name of Gun Control. We are used to that, nothing new there. But directly advocating the righteousness of piling people in concentration camps without due process and because of religious or ethnic differences according to some court’s “decision” is beyond the pale.

CSGV accuses us of being Insurrectionist because I oppose Gun Control and the measures they intend to use against us. I plea guilty.

Labels: Gun Bigots, No Words For This Level Of Disgusting

I'm going to have to dig out my copy of Luther v Borden to see what Justice Taney had to say about this (yes, the Dred Scott Taney. IIRC in Luther v Borden he said that the constitution did not authorize the taking up of arms against a state that had 5-1 mis-apportioned representation in the state house, that refused to change said re-apportionment and which refused to eliminate the onerous property requirement for voting and establish universal white male sufferage as was common in every other state in the Union).