About that ban on Korea sending Garands and Carbines back,

"It's a very select core of old-school ATF narcissists who have just become too powerful and too arrogant," the source reported.

A spokesman for the U.S. Department of State explained to WND when the re-importation ban initially was announced that the permission had been granted for the rifles to be shipped to the U.S., then it was rescinded.

The decision, explained Karl Duckworth, was prompted because of "concerns that such large numbers" of weapons would be brought into the U.S. and they could be "exploited for illicit purposes."

However, he said he could not elaborate on who expressed the concerns.

Codrea has described the classification as a "beachhead" for gun control.

"This is the grave threat to the republic?" Codrea asked. "This is nothing less than legislation by unaccountable bureaucrats with an agenda that has nothing to do with legitimate delegated authority."
Yeah, it's WND; it's still information on this crap. As to who 'expressed concern', I think we can make some pretty good guesses: 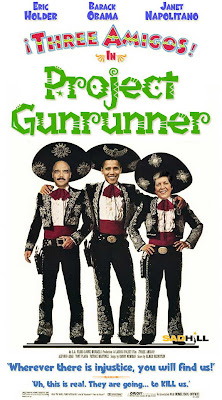 for three. Add in a SecState Clinton for four...
Posted by Firehand at 10:29