In this case, something I've never done before: fitting a beavertail grip safety and commander-style hammer to the project pistol 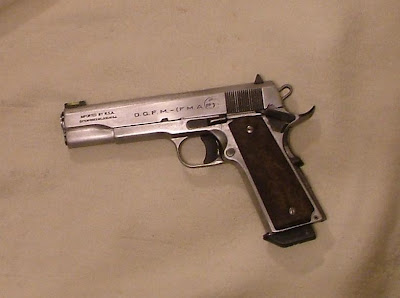 If you've missed previous mention of this, it's a 1927 Sistema from Argentina: manufactured there to standard GI specs. This one had no finish, a really ratty bore and mismatched numbers on the frame & slide*, so modifying it wasn't changing a collectors item. In the past I put in a new GI-spec barrel (which really did drop right in), did a lot of work cleaning up the surface**, put in a new trigger and generally cleaned & adjusted. And sights; a fiber-optic front sight and a tall MacMillan rear to put it on point of aim; the original sights were a bitch to see in all but perfect light, the new front was taller so the piece shot low, the new rear is both easier to see and just the right height.

The grip safety is a Chip McCormick. I'd never done one of these before, so there was a lot of mark, file and try, mark and file and try until I had a very tight fit on the frame, then used 220-grit abrasive cloth to make it slick. Then, as it stood above the frame in areas, used the dremel(calm down, VERY carefully) to take the bulk down and then file & paper to blend it in. There were only a couple of places where it dragged when moving so that was easy to polish down.

The hammer is one a friend had left over from a repair job***; it fit right in.

When everything is done as far as parts and fitting and whatever, I'll give the surface a final clean & polish and either blue or parkerize it. About the only thing left is either an extended magazine release- this one is really short- or see if I can drill & tap a hole and put a extender on the original.

It's been interesting to work on, I've learned a lot, and I can now detail-strip a 1911A1 faster than I'd have thought possible a few months back.


*The dealer I got it from had received a bunch of the last shipment of these; he had a few with a cracked frame and a few with a cracked slide, so they were mated to good ones.
**Done with abrasive paper wrapped around a file. Started with 120 grit, then went to 220 wet/dry; it cleaned up very nicely.
***Some guy had tried to do his own trigger job by messing with the sear; gunsmith got him a matched hammer/sear set to fix the gun. Yes, it would be better for me to do the same; right now I can't, and the hammer appeared untouched AND was free.
Posted by Firehand at 18:01

Interesting! 1911 clueless southpaw here: could you add an ambi safety to a Sistema?

Yes. In every dimension it's the same as a 1911A1, all parts are interchangeable, and all accessories should fit.