There's a cartoon showing a palisimian kneeling behind

a stroller to shoot at an Israeli, who's kneeling in front of one. It ain't just a cartoon:
That is why we have 4 wives and many children. They are to stand in front of us so that we are able always to fight another day. If one wife is martyred, I am never lonely; if a dozen of my children protect me, I can create more - allah willing! It is our right;it is our way;it is our religion, the prophet be praised
This piece of disgusting cowardice is in comment #23, labeled 'Fighting for the Prophet'. So, for Hamas hiding behind women and children is being 'able to fight another day'. You know, one of the most basic things in most cultures is the mindset of 'women and children first' to SAVE the women and kids; first into the lifeboats and so forth. So the islamists have managed to warp that into "Women and children into danger and death first, because us brave warriors of islam have to live!"

If there's a more blatant example of real moral corruption, I don't know what it is. And we're supposed to support giving these scumbags a country. So they and their prophet(bees pee upon him) can push this attitude and 'kill the Jews' along.

Some of the other comments are kind of enlightening, too. "You Jews will be thrown out of Europe", "The Israelis are cowards"(for fighting to win, with all available weapons; how DARE they?!?) and so forth. Someone might advise the one moron that someone already tried to throw them out, those that weren't murdered or who didn't manage to escape; that's one reason for the state of Israel, and why- when the chickenshit politicians don't prevent it- they'll ALWAYS fight to win.

Nod to Sondra for pointing this out. Also this demonstration of the "Hide behind the women and kids!" principle:
The study by the Terror and Intelligence Information Center shows that when the IDF warns Arab civilians of an impending attack in their neighborhood, Hamas uses the information in order to organize the civilians into human shields in the hope of protecting the targets from the IDF’s wrath.........
What was that line, "There will be peace when the arabs love their children more than they hate Jews"... 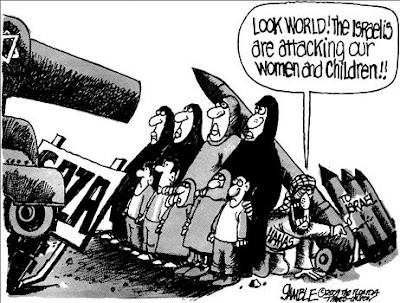 Thanks to Denny for the illustration
Posted by Firehand at 17:10

Careful! Comment #23 may have been written by someone carrying water for a political movement, but which one?

F#CK pieces of sh*t like that! Allah willing my ass! A face full of lead might help, allah willing and all.

The islamonazis are never happy we have technology and the means to use it as they are aware of the backwardness of the whole islamic world when compared to even the smallest western nation.

The other day I looked for hours for that exact bumper sticker. It tells much of the story without a single written word.

If somebody has a copy of that picture of " a cartoon showing a palisimian kneeling behind
a stroller to shoot at an Israeli, who's kneeling in front of one."
I would love to have it.