like Pontius Pilate. To borrow from somebody, Jeebus on a pogo stick, these people are freakin' insane.

The link above has some background on Rep. Cohen(Useful Idiot-TN). It's kind of amazing, this 'follow the Party orders' mentality.

Of course, this Party's leaders are backing Mr. “I personally feel I have done nothing morally wrong,” Rangel in his most recently exposed bullcrap. So Cohen sucking along isn't too surprising: "The Good of The Party Is Everything", after all.

Of course, this is the party with a Presidential candidate who has a friend like Bill Ayers 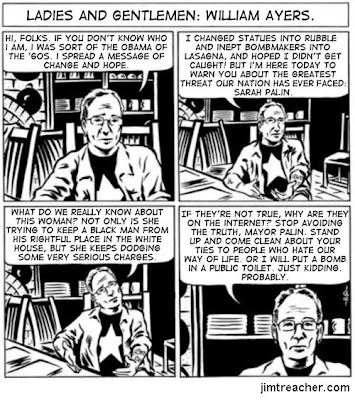 of whom their main concern is saying "No, he was just a casual acquaintance" with no condemnation of what he is and what he's done. So, compared to that, what's protecting a tax-dodging jackass like Rangel?

Cartoon stolen without hesitation from Treacher.
Posted by Firehand at 08:44

Steal away! And check out the origins of that dumb "Jesus was a community organizer" meme: