Having finally made time to do this, I'm going to harden the blade that was forged here and ground here.

Here's the blade, and that line drawn in is important. Generally, I want to bring it up to critical heat in that range back from the edge, not much farther. 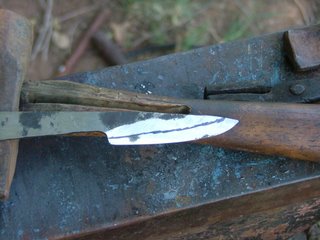 That means that section will be at full hardness, with the area further back tougher to support the hard section. Not a big factor with a small blade like this, and you can harden the entire blade. It is how I prefer to do it on all but smaller blades.

I lit the forge, and made three of the roasting forks while it burned clean and larger, so I had a clean fire with all the coal that will be on/around the steel coked. I also got a small pot I keep for this and filled it with quenching oil. Before I started on the blade I took a piece of steel and brought it up to a bright red, then quenched it to heat the oil; warm oil(around 100F) flows better and gives a more even quench. When it was ready, the blade went into the fire. 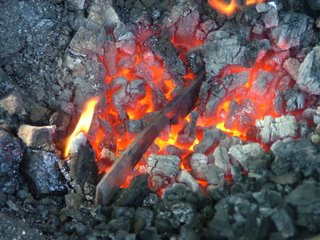 Note that it goes in roughly horizontal and with a very low air flow at first to let it soak up heat. Depending on how thick and/or wide a piece is, you may only need the low air blast. The big factor on even heat is to make sure the fire is large enough to bring the whole blade up to temp.

In case you've wondered, you can see how spooked the guard staff is by the fire and hammering: 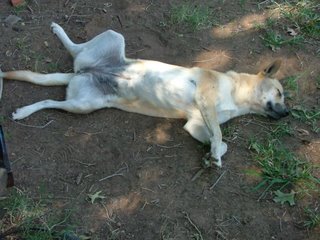 When the blade is at heat, that mid-to-bright red I've tried to describe, it comes out and is lowered edge first into the oil, at a slight downward angle. I try to submerge from the lower rear corner to the point or just a bit further into the oil at first. Then, after a few seconds with a wide blade, move it up & down vertically just a bit. I hold it in the oil for a good 20-30 seconds and then submerge the entire thing. No picture of this; not enough hands.

Here's how it looks fresh out of the oil. 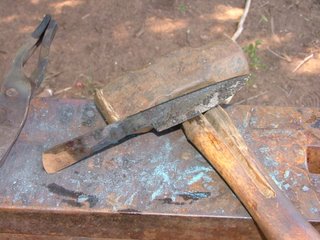 You can see the difference in color between the area that was fully hardened and that further back. Often you can tell if a steel hardened properly simply by that appearance, best way to check is with a file. A sharp file will, at best, almost bite the steel; generally if the piece fully hardened it'll just skate on the surface.

I'll let the piece cool completely, then give it a second hardening. After it cools from that one, with the oil and scale scrubbed off, it looks like this: 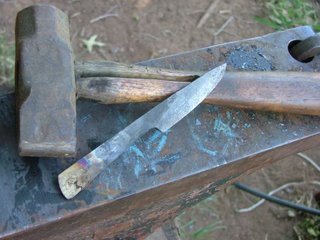 Fully hardened and ready to temper. I'll cover that later.