One of the nice things about what John Ross labeled the 'gun culture' is that people tend to have neat boomsticks, like to talk about firearms and are generally friendly. And if a friend has something new/unusual/they just like, if you leave a testicle as security ask nicely they'll let you take out to the range and try it out. Which brings us to this piece. 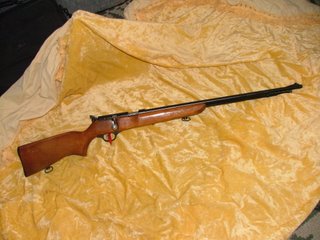 Marlin has made a lot of different firearms over time, this one being a bolt-action target rifle with a tube magazine. Bolt handle is long and runs straight down, then turns out into a large round knob. The stock is a hardwood with a red stain, nicely fitted to the action and barrel. It widens in front of the trigger guard and has a flat bottom, sling swivels mounted at the factory. It has an aperture sight on the receiver 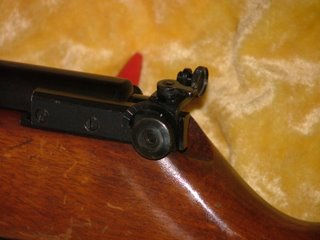 with an unusual adjustment system. The elevation you loosen a locking knob and turn a snail adjuster that moves it up or down; for windage there's a locking arm you push to the left to loosen and then push the aperture left or right. Front sight is a gold bead.

The trigger is a two-lever type(yes,I took the action out of the stock to look) that breaks at about 4-5 pounds with a touch of creep.

From what I can find the original model was the 81-B. The 81-DL was manufactured from 1941, then stopped turing WWII. It resumed in 1945 and ran 'till 1964. Stocks on those made before WWII had a forend like this one, postwar rifles a more standard shape and those after 1957 a walnut stock in a Monte Carlo style.

I started off with Federal Champion ammo to zero and generally shake it out, then tried some Eley Sport and some of the S&B that's floating around. It liked the Fed & Eley best, giving groups like this: 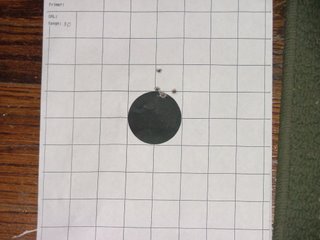 For 30 yards with a not overly steady rest, not shabby at all.


Overall a nice rifle, well worth having. I think the trigger could easily be polished to 2-3 pounds and clean, and that's all it would need. If you ran across one it'd be well worth making yours. Or the kids. And if they're a bit small for it, then you can use it till they grow up.
Posted by Firehand at 06:43