Over the years Remington has made a lot of different .22 rifles, from single-shots to semi-autos. In my personal opinion the 510-series rifles were some of the best. They are all bolt-actions, and range from a single-shot small game and plinking rifle to a full-blown match rifle, and some models had smoothbore variations for shot cartridges. Some of the repeaters had box magazines, the others tube like the 512, also known as the Sportsmaster: 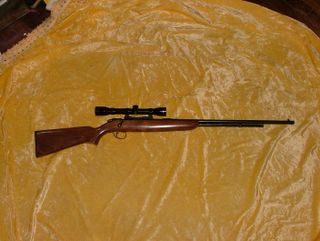 They're full-size rifles(which made shooting my Dad's difficult when I was small), all steel and wood. I've had a chance to shoot several, and they all had good triggers; some were heavier than others, but all broke cleanly, an important thing for accuracy. Sights ranged from notch rear and bead front to match-type adjustable. And they were capable of fine accuracy.

I found this one some years back, and bought it mostly because it is the same model as Dad's. Like a lot of old rifles it had a problem, but it only cost about $15(shipping and all) for the parts, and it's worked well ever since. And I've been very damn glad I bought it.

When I say capable of fine accuracy, I mean it. A while back I decided to try some different ammo in mine, and with Federal Lightning(I've had such good results from the stuff it's become my default starting ammo for testing) it shot groups of 3/8" at 50 yards(I had a very good day), and would do it consistently. They vary, of course, depending on individual factors, but with the right ammo most of them seem capable of this level or close to it(yes, it was shot from a solid bench with sandbags; I don't think I could do that offhand with anything).

This one has the notch/bead sights, so about a year after I got it I mounted a scope(first time I'd drilled & tapped a receiver for a scope mount, and I sweated blood making sure it was square and that I didn't accidentally drill through into the chamber). The stock was a little beat up(surprise, surprise), so I scraped the old finish off, sanded lightly and gave it multiple coats of Parts availability is generally good; Remington made a lot of this series, and many of the parts interchange. Also, made as they were, it's pretty rare for something to break or wear out as long as they're treated decently.

All in all, if you run across one of these you should definately think about giving it a home; you could do a lot worse.

Additional notes: the main thing that does seem to happen to these is that the nose on the sear that acts as a bolt shop will get chipped or worn and will let the bolt slip out when you pull it back. The other thing that affects this is one of the screws on the left side of the receiver; if it's not staked tightly and gets a little loose, that can cause problems. Both are easily fixable/the sear takes a little more work/.
This was the rifle I was going to use for the .22 postal match. If (pick from the list) hadn't happened.
Posted by Firehand at 20:48

I know this is an old post. But I have an old 512 with the rear site missing. I'd like a replacement but have no idea where to even start looking for one. Would love some direction.

First place would be Numrich Gun Parts, http://gunpartscorp.com/. If they don't have it try Popperts http://www.poppertsgunparts.com/index.htm
or Dick Williams http://dickwilliamsgunshop.com/

My cousin bought a NIB Remington 512 .22 sports model rifle in India. Could you recommend a telescope, mounts etc for installing a scope and any guidance would help. Does he need services of a competent gunsmith? Guns are very expensive in India due to draconian gun laws and also due to supply and demand situation.

Let me check around, get back on this. Hopefully later today.

Scope base can be found at Gun Parts, here:
http://www.e-gunparts.com/DisplayAd.asp?chrProductSKU=574360&chrSuperSKU=&MC=

The rest, I'll put in a new post; a bit long for here

Thanks for the feedback and my concern is drilling for installing the mounts but will look forward to your detailed post.

From the link we need to order Bridge mount, the very first item.

Hi, I've been hanging onto my dad's old 512 for 30 years now and finally bit the proverbial bullet and paid $60 for a bolt for it. Ihave a schematic of the rifle but I'm having a dickens trying to get the bolt into the rifle. Help please,
Kendall

Ok, first thing is the bolt has to be cocked. Look at the hood at the back of the bolt; there's a hole in it, and a pin that's the back end of the striker. If the pin is not sticking out, it's not cocked. To cock it, grab the front half of the bolt body(glove may help), hold it and rotate the bolt handle up(or to the left, if you prefer); that should move things to the cocked position.

Normally, all you have to do now is hold the rifle at the grip with your left hand and pull the trigger back & hold, and the bolt should slip into place, when it stops release the trigger and it should now go all the way forward.

Sometimes there's a piece of the feed mechanism, I think the carrier or cartridge stop, that can be in the 'up' position; if it is the bolt can't go in. If it is, first pull the inside magazine tube out as if loading; take a pencil or something about that size with a flat end, put it in the receiver in front of the bridge(behind the chamber, in front of the curved piece that's solid) and push the piece back; it should rotate back & down and lock, and then the bolt should go in normally.

Sorry I was so long replying. With your tips I got the bolt reassembly figured out. This little rifle really cleaned up! I refinished the stock and worked the metal over good and it is a shooter. I want to find a period correct, 3/4 or 7/8 tube low power scope for it. Numrich is out of the Tasco mount, any other suggestions?
Kendall

are three places might try. Could also go over to Rimfire Central
http://rimfirecentral.com/
and ask there; if anyone knows of one, someone there will. Or have one for sale.

The Model 512 was my first rifle. Over the years it is still my favorite. It was very accurate. I got to where I could knock rabbits over running 7 times out of 10 with it.