When they didn't want blacks to vote, one of the things they tried

was poll taxes: "You have to pay this tax or you can't vote."  And if most of the people you didn't want voting were poor...

Anti-rights people still like the idea, although they want to use it on the right to self-defense nowadays: 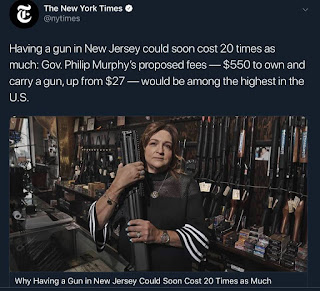 "Oh, no, we're not restricting the 2nd Amendment, we're just enacting/raising this tax on owning a gun."  Same people who'd scream bloody murder if this was mentioned on voting think it's a great idea.  And it doesn't bother them- they probably consider it either a bonus or the point- that poor people will be the ones screwed by this.  Especially poor blacks.

Assholes haven't changed, have they?
Posted by Firehand at 06:31

A tax is a burden or infringement on an individual's rights.

Gun and ammunition, knives, swords, bows, arrows, Spears, and all other man-portable arms should be tax free.

So should crew-served weapons and anything weapons related, maybe restrictions on nuclear, chemical and biological, but those issues really can be handled through various EPAish regulations.

Makes me hurt to invoke the EPA, but... sometimes they can be right, even if it kills them.