"But if we don't have a SWAT team, or at least a bunch of armed agents,

we won't be some of the cool people!"
Special agents at the IRS equipped with AR-15 military-style rifles? Health and Human Services “Special Office of Inspector General Agents” being trained by the Army’s Special Forces contractors? The Department of Veterans Affairs arming 3,700 employees?

The number of non-Defense Department federal officers authorized to make arrests and carry firearms (200,000) now exceeds the number of U.S. Marines (182,000). In its escalating arms and ammo stockpiling, this federal arms race is unlike anything in history. Over the last 20 years, the number of these federal officers with arrest-and-firearm authority has nearly tripled to over 200,000 today, from 74,500 in 1996.

What exactly is the Obama administration up to?
Hey, us peasants can't be properly controlled by agents with stern expressions, y'know.


This has been turning up.  I'd say the message is getting through. 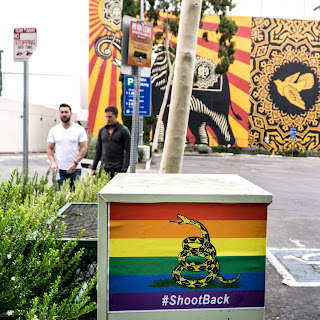 Which has got to be causing serious chafing among the hoplophobes and gun bigots.


One more reason to get rid of the EPA: "Obey the court's order?  That's for peasants, WE are the EPA."

If you'll excuse me for a while, I'm going to try to get some mowing and such done before the heat index hits the "Why am I melting into my shoes?" point.
Posted by Firehand at 07:06

I actually was pleasantly surprised by the results of my twilight mow last night. I can only get the front or the back done in one night between sundown and too dark, but its much better to deal with 90 degrees and no sun than it is to deal with 75 degrees and blazing sun.

I think that will be my plan for the summer -- just do the mowing at twilight. (I'm kidding myself if I ever think I'm getting up early on a weekend to mow, and I'm sure not getting up early to mow and THEN going to work.)

Got the back mowed- except for the two patches of clover the bees like- before it started getting actually nasty. That'll probably be me for the summer, too.

Heat index yesterday and the day before was around 110-111, and I don't handle that as well as I used to.