No, we don't need to worry about refugees,

or the border, nooo....
Police in a U.S. town bordering Mexico have apprehended an undocumented, Middle Eastern woman in possession of the region’s gas pipeline plans, law enforcement sources tell Judicial Watch. Authorities describe the woman as an “Islamic refugee” pulled over during a traffic stop by a deputy sheriff in Luna County, New Mexico which shares a 54-mile border with Mexico. County authorities alerted the U.S. Border Patrol and the Federal Bureau of Investigation’s (FBI) Joint Terrorism Task Forces (JTTF) has been deployed to the area to investigate, sources with firsthand knowledge of the probe confirm.
There's going to be a attack of some kind by someone like this, and when people yell about it that idiot in the Oval Office and his minions will call them racist and unfeeling for being upset, "Why do you hate refugees and immigrants?", etc.


Alex Epstein had a terse response to a subpoena sent by Massachusetts Attorney General Maura Healey Wednesday.
...
Healey’s subpoena targeted the Center for Industrial Progress (CIP), a for-profit think tank founded by Epstein. Epstein wasn’t exactly happy about being targeted for disagreeing with Healey on global warming, so he sent the AG’s office the following response: 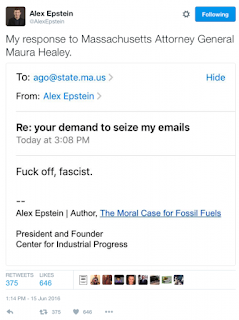 So, a guy who announces, before and DURING the attack, that he's with ISIS and so forth, but the Usual Suspects are still playing "We are having trouble figuring out why he did this!"
Here's that 'before':

Anyone having trouble figuring out why, or playing "It's because of Christians/conservatives/anti-gay/anything BUT jihad!" are either idiots or on the enemy side.


So Sen. Joe 'I support the 2nd Amendment' Manchin said this: Due process is what's killing us right now
So he's not actually that hot on the 2nd, and he doesn't care for that nasty due process.  What else in the Constitution he swore to uphold does he consider a problem?

Dems and media are *this* close to saying the US Constitution is killing people. They are testing those waters right now
— Stephen Miller

What else in the Constitution he swore to uphold does he consider a problem?

Just a guess but it's probably the part after "We the..."