CherryBalmz: there will be tests

Was told about this stuff, and picked up some to test.  Since I know someone who's planning to try out their Black Rifle Balm, I ordered the Ma Deuce Juice, since I like grease for frame rails and such.  Fast shipping, ordered it on the 6th and it arrived on the 10th.  And they threw in a bottle of the Balm. 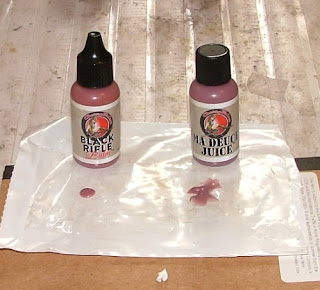 Both do have a cherry-like aroma, both the same reddish-pinkish color.  The Balm is a very thick oil/thin grease, the Juice a definite grease.  Half-ounce bottles.  That white pile in front is Lubriplate SFL-0 grease(very good stuff) for comparison.  I had to use a screwdriver to get some of the Juice out, so it's a bit smeared.

Holding that plastic pad vertically for more than a minute, the Balm didn't run, it just sagged a little, very slowly; the Juice moved not at all.  Put the pad on the angled front of the desk and left it there while typing, after about three minutes the Balm had sagged about 1/8"; unless it thins a lot when heated, it's not going anywhere.  The Juice stayed right where it was like a good grease.
Added: it's been sitting at that angle for about ten minutes now, the balm has sagged about 1/4".

From the site, on the MDJ,
...a lightweight grease that provides unmatched longevity, lubricity, wear-resistance, and protection for firearms.  Its consistency is about an NLGI #0, which is roughly the consistencly of mayonnaise, only creamy and stringy- excellent for application and staying put in sliding systems.
...robust additive package, etc.

On the Balm,
...lightweight grease appearing somewhat as a gel, engineered with modern rifles in mind, where enclosed constructions, tighter tolerances, high heat, dust, and large volumes of fire in austere contditions are a reality.  Just like Ma Deuce Juice, it stays where you put it, even in extreme heat, but BRB is carefully engineered to allow just a small amount of "flow", permitting a little ancillary movement and spread during weapon cycling.
'Gel' is a good description.  That's been sitting there as I worked on this, it's sagged that 1/4" and that's it.

Mentioned once before that one of my favorite test beds for lubes is my .22 conversion for the 1911; if the lube doesn't work well, it won't function properly.  So I'm going to clean it and the frame to bare metal, lube it up and shoot it; and I'll try both, cleaning thoroughly in between.  And I'll decide what other stuff to try it on.

I am suspicious of any of these new gun lubes that smell like perfume..... seems like a gimmick.

Pretty obviously; with 'cherry' in the name you kind of expect some scent.

You just made me think of someone marketing "Dog Poop Ultimate Lube!", the possibilities are horrible

Have you found any downsides to the lubriplate?

No. Stays where you put it, very slippery, but easy to wash off your hands with a good soap. There's barely any scent to it, and it's a food-handling-equipment-safe grease, not a big problem getting it on you.

First read about it here
http://www.grantcunningham.com/2006/05/lubrication-101/

The one problem is getting it. I've found the '1' grade in tubes on Amazon, but the '0' grade I could only find direct from Lubriplate. It's a 14oz. can(smallest you can get), and it'll last damn near forever; I've given some to family and friends, and even with my use I've still got well over half the can.

I just started using the lubriplate after trying all the latest 'wunderloobs', that's why I was asking.

Grabbed a can of the SFL-0 off midway.

I'm pretty sure 90% of that can will be bequeathed in my last will and testament.

That's improvement, when I was looking for it NOBODY had this can except Lubriplate