I made it to the outdoor range for a bit of testing and general fun.  Couple of light loads in .30-06, sighting the project rifle, and some other crap.  Including a .22 just for fun.  Well, and making sure it was zeroed, but otherwise for fun.

The two light loads were using the 100-grain SWC and 115-grain spitzer, both sized .311" over 3.0 grains of Bullseye, at fifty yards, ten-round groups, target has a 3" bullseye.
SWC 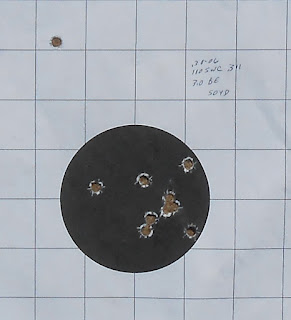 I have no idea what happened with that one up high-left, all others went well as I could hope for with iron sights. 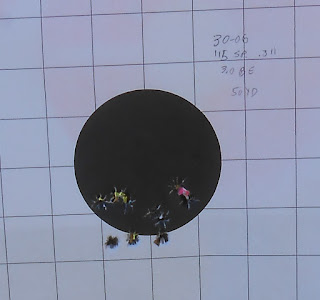 I was able to set up the Chrony:
SWC loads highest velocity 899, lowest 818, average 840fps.
Spitzer loads highest 781, lowest 729, average 760fps.  That extra 15 grains in the bullet did pull it down a bit.
I still get a bit of a giggle-fit at times when pulling the trigger on a 1903 produces a mild 'bang' and about as much recoil as a .22 while creating groups like this.

For straight practice, I'd go with the spitzers; with my dies(Lee) they're a lot easier to get seated evenly at the depth I want than the SWCs.  For pest control around a garden/farm/whatever, I'd go with the SWCs; that flat nose would, I think, work a lot better for putting them down.  I do need to find a set of .30-06 dies of different brand to try, see if the SWC problem is with the bullet length and shape, or something about the dies.

Also had a few .30-30 loaded with the SWC over 2.5 grains of Bullseye, which produced this: 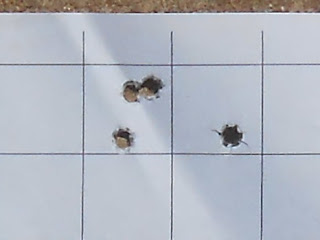 There was one more that I pulled a bit high, and I didn't save that particular target.  Also didn't think to take a picture before pulling this one(it's at the top of the spitzer target).  That group is about 6" below the point of aim as I didn't adjust the sight for the load.  Velocity for these, high 826, low 723, average 793fps.


On the project rifle, in no particular order:
Capable of fine accuracy.
Since they don't make one, I need to get a grind-to-fit Limbsaver pad and modify to fit; few rounds hunting, no big deal; bunch of rounds in cold blood from a bench, for my shoulder at times, problem.  I had a Limbsaver slip-on in the range servant, otherwise I'd have been in trouble.
I looked at the ballistics charts Federal has for their factory ammo, they show very little difference in trajectory between the 185-grain and 200-grain bullet loads; at least in this rifle, the hell there's not.  A zero with the 200-grain at 100 yards had the 185 hitting right at 6" high.  I really need to find a longer range to use for some shots, only way to know exactly how these things will perform at longer distances.
I took along some handloads made from Winchester and Federal .308 brass formed to .338, using Varget and 200-grain Speer softpoints; they shot nicely.
No, I didn't pull that target or take a picture.  Blame it on getting really hot and worn at that point; once summer got here, it really did.

Thus ends my report for the day.

Those would make some nice, quiet suppressor loads...

Should, being that far subsonic

You do realize that under the proposed ITAR changes this could land you in Club Fed? And not the location with the miniature golf but the one that has no daylight.