Short & dirty version: "That cracker told people what Khadija tweeted, and us colored and superior people want him to PAY!"


Israel-hating leftist loses, tries to spin it as victory.

He added: 'They are extremely brutal. Not just head-cutting. I'm talking about the strategy of religious cleansing. That's their official philosophy. They are talking about 500 million people who have to die.'
I'm sure John Effing Kerry will subdue them with stern statements that they're not really muslim and are giving the group a bad name.

Oh, and the journalist informs us that it's still the fault of the nasty BOOOOSH. 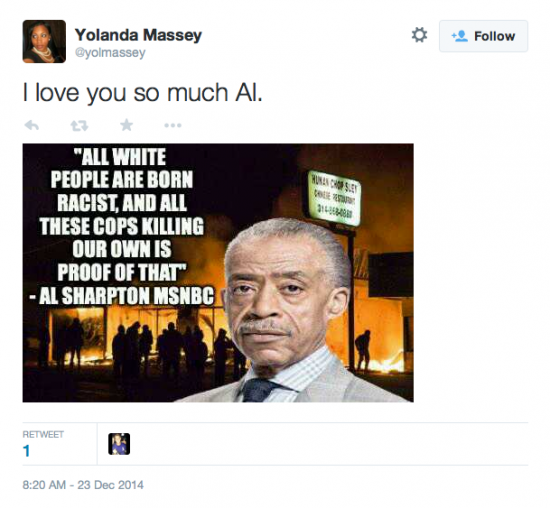 Not only is there a group calling itself the Trayvon Martin Organizing Committee, but they were apparently the ones with the 'What do we want, dead cops' chant.


"Yes, it was illegal for the murderer to have a gun, but if the NRA hadn't kept us from making it ILLEGALER, it would've stopped him!"


"Church would be so much better if we stopped concentrating on that religion stuff."


“The blame game,” Sharpton now says, “will only lead to further kinds of venom and further division.”

Ironic words from the tax deadbeat who invented Tawana Brawley and who has spent a lifetime denouncing “white interlopers,” “diamond merchants” and “fags.” None dare call it hate speech.


Aunt: “Go pull the car around and I’ll grab our stuff. We are leaving. These people are dangerous.”
Dad: “No. I’m not going to let you give car keys to an intoxicated 10 year old.”
Hoplophobia and bad parenting at its finest.


In a later update to his post, Bernstein added, “[A]s a woman pregnant out of wedlock, if Mary was a Palestinian she’d have a lot more to fear from a potential honor killing than she would from having to traverse and Israeli checkpoint; twenty-seven Palestinian women were victims of honor killings in the West Bank and Gaza in 2013 alone.”