They need to start handing out copies of this

to every LE official in the country.  Some places in particular.
Regardless of your stance on the militarization of American police in general and the recent events in Missouri in particular, here’s a simple truth: a police department that loses the trust of the community it serves can no longer fulfill its primary function.

I am not anti-police—I recognize policing duties as one of the few legitimate and important functions of a state. But the War on Drugs, onerous and liberty-destroying as it is, has merged with the War on Terror, and as a result we have big-city police departments who are perpetually in conflict mode.  It’s not that I mind the cops having AR-15s. What I mind is that “compliance by overwhelming force” has become the first and only tool in the toolbox in many cases. If you dress your cops like soldiers, equip them like soldiers, have them train like soldiers, and adopt the lingo of soldiers, it’s really no surprise when they sooner or later start feeling and acting like soldiers.

And, to push that point, this needs to be at the bottom: 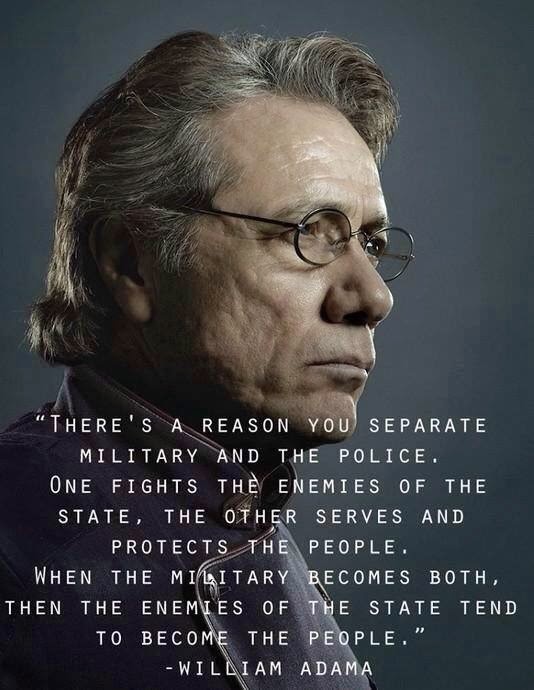 Add this from Lawdog to it, too.

I wonder how much of the change in policing is due to the increased concentration of our population. If you're a police officer in a town of 1000 and treat people badly, your friends and neighbors will punish you. In a community of 1,000,000, the odds of people who know you personally encountering you professionally are very slim. So your bad behavior is never noticed by those who matter to you.

I just wish society had the ethic that the only true crimes are the ones that pick my pocket or break my nose. Instead, everyone feels the need to "do something" to address societal issues, and what they do is pass a law. Each law gives the government another stick with which to beat people into submission.

On those lines, WizardPC had this a while back:
'I would like politicians and bureaucrats to acknowledge this: Every law, rule, and regulation made by the government ends in puppy killing SWAT Teams. Every dime that is spent in our name was taken at gunpoint.

I want them to understand that every action they take has this statement as a footnote: “This is important enough that my grandmother should be killed if she does not abide.”

The rhetoric might be a little over the top, but that doesn’t mean it’s not true. Take the story of Rawesome Foods, who were raided twice in one year by full-ninja swat teams for such horrible crimes as “improper egg temperatures.” I mean really what could possibly justify that?'