who's encouraging people to make bogus 911 calls to harass people believed to be in the tea party.


Supreme Court says it's perfectly legal to call in anonymous tips. A tea partier looks like a terrorist to me. pic.twitter.com/dyl3HQ7pDi
— DickinsonForCongress (@VoteMike2014) April 28, 2014

Bad enough.  I can see someone suing his ass off, and isn't there something about misuse/abuse of 911 in the law?

But he gets even worse. 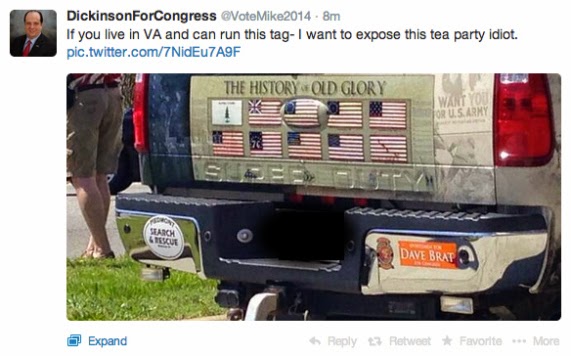 Asking someone to 'run the tag' for him?  Really?  Dickheadinson, you effing moron,do you have any idea what you may have set yourself up for?  How 'bout the owner of said vehicle suing your ass off?  And if someone got the owners information illegally and you use it, just what level of legal hurt are you asking to get shove up your ass?

That's after the charges for the 911 bullshit, and any damages that may be involved in that.

Yet Democrats and leftists insist conservatives and libertarians are full of hate...

once again a very illustrative of the unintended consequences of compiling random data into a searchable format.