this is pretty good.
“It would be better that the Government recognised that there are risks, rather than frightening people in order to be able to pass laws which restrict civil liberties, precisely one of the objects of terrorism: that we live in fear and under a police state,” she said.
Since holding terrorists and enemy combatants in Gitmo upsets everyone so much, I have a suggestion: start treating them like precious international law says, and shoot them when captured.

Yeah, I know; they'd scream bloody murder about that, too.


If you use/used Skype, guess what?


Keith has won the 'nets with this:
so that's the collective noun for progressives:

an indignant of progressives


Speaking of indignation, "We can't let the non-muslim kids have a drink, it might upset the muslims!"


Second, it can be extremely painful to be a law-abiding citizen in today's media environment. Around 500 murders have happened in Chicago while the Zimmerman fiasco has been going on, yet there's no attendant media circus. And we all know why ... it's largely black-on-black crime, so the race hustlers can't get a foothold. 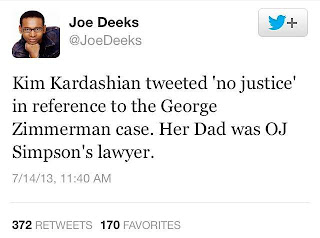 So, due to the sequester the troops and civilian employees need to be screwed over, but they have money for this?
The Defense Department recently awarded a $3.5 million grant to Joint Base Lewis-McChord in Washington state to buy the 2,600 acres of prairie land surrounding it.
The move is part of an attempt to protect the Mazama pocket gopher, a species that is not considered either endangered or threatened.