What do you do when your idol refuses

to say what you want him to? Must've been frustrating as hell for him.


A bit of history that, unfortunately, is generally forgotten(considering schools today, probably not taught):
How many know that perhaps 1.5 million Europeans and Americans were enslaved in Islamic North Africa between 1530 and 1780? We dimly recall that Miguel de Cervantes was briefly in the galleys. But what of the people of the town of Baltimore in Ireland, all carried off by “corsair” raiders in a single night?
...
Let us not call this view reductionist. Jefferson would perhaps have been just as eager to send a squadron to put down any Christian piracy that was restraining commerce. But one cannot get around what Jefferson heard when he went with John Adams to wait upon Tripoli’s ambassador to London in March 1785. When they inquired by what right the Barbary states preyed upon American shipping, enslaving both crews and passengers, America’s two foremost envoys were informed that “it was written in the Koran, that all Nations who should not have acknowledged their authority were sinners, that it was their right and duty to make war upon whoever they could find and to make Slaves of all they could take as prisoners, and that every Mussulman who should be slain in battle was sure to go to Paradise.” (It is worth noting that the United States played no part in the Crusades, or in the Catholic reconquista of Andalusia.)


Roger Simon:
Indeed, the beginnings of Islam are the very stuff of great theatre and cinema, reprehensible as the actions of the protagonist may be. In fact, it may be great because of those actions. After all, Richard III is not a classic for nothing.

So I am very tempted by the subject of Mohammed.

Arrest me, Hillary Clinton, before I start. Call Eric Holder!

And while you are at it, tell him to round up Salman Rushdie. His novel about Mohammed is obviously blasphemous. He was lucky to escape that fatwa. We should have one of our own.
Speaking of which, 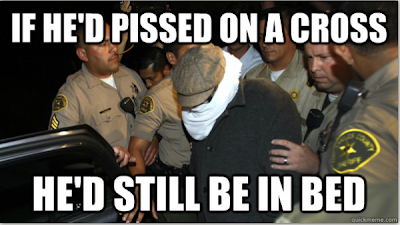 'Encouraging'... not exactly the word I've have chosen.


Some more evidence that the embassies were leaking like Chris Matthews' brain:
A squad of U.S. troops despatched by helicopter across the Libyan desert to rescue besieged diplomats from Benghazi on Wednesday ran into a fierce ambush that left a further two Americans dead, Libyan officials told Reuters. Captain Fathi al-Obeidi, commander of a special Libyan operations unit, said his men and an eight-man U.S. force came under attack after American survivors had left the blazing consulate and moved to an ostensibly secret location in an isolated villa. The villa came under an intense and highly accurate mortar barrage.

“I really believe that this attack was planned,” he said. “The accuracy with which the mortars hit us was too good for any regular revolutionaries.”

Connected: I'd heard bits & pieces about this, just ran across this post today:
The Lebanese news organization Tayyar.org is reporting that the murdered American ambassador to Libya, J. Christopher Stevens, was raped prior to his killing September 11, 2012.

The Lebanese news report cited the Agence France-Presse (AFP) broke the story when given the information by an unnamed senior member of the Libyan Interior Ministry.

"...was killed and representation of his body in a manner similar to what happened with Gaddafi, such as murder."

Wonder if we'll every know the truth of this, yes or no?

Connected: from Front Page Mag:
In the Wikileaks cables, Stevens cheerfully described fighters who saw “resistance against coalition forces in Iraq” as “an important act of ‘jihad’” and local businessmen who took pride in the number of suicide bombers who had come out of the area. For years he had walked safely in their company without understanding that he was just as much of a target as a Marine in Baghdad, but without the training, the weapons or the survival skills.

The only reason Christopher Stevens had lasted this long is that the jihadist fighters had known a useful man when they met him. And Stevens proved to be very useful, but his usefulness ended with Gaddafi’s death. Once the US successfully overthrew Gaddafi and began focusing on stabilizing Libya, Stevens ceased to be a useful idiot and became a useless nuisance. Attacks soon followed on the Benghazi consulate and on other consulates as well, but the Marines were not brought in and Stevens continued relying on local goodwill to secure his offices. It was only a matter of time until the attackers got through.


Yes, I'm gloomy this morning: it's overcast and damp outside, our idiot Fed director has made sure my savings will continue to lose value, a bunch of dirtbags in Sodom on the Potomac have openly shown they don't give a rats ass about the Bill of Rights, and the other consequences of electing this socialist jerk

are helping blow up a large area of the world. If I didn't need to go somewhere, I'd have a drink.

Diplomats and such aren't worth the shit that comes out of a fly's ass, much less an armed response.