Nothing bad to report. Either they had a lot of bugs in the early ones and I got one of the buggiest, or it was simply a lemon. In either case, I've now got about a thousand rounds through this one and the only failures to function I can blame on either not having the top round in the magazine in proper position(round popped to vertical instead of feeding), or a couple of brands not having quite enough oomph or something to cycle the action. Odd, that; it's fired Eley Sport and some other subsonic stuff with no problem, but a couple of brands this one just won't work with.

Remember the Remington Golden Bullet problem? I found a box of old stuff, between 2-3 years old, buried under some other stuff and tried some of it; functioned perfectly in this rifle. But the stuff made since? Not so much.

When I got this rifle I wiped out the bore with Eezox, and wiped the bolt and rails clean with it, left it open to dry and haven't touched it since. It's been roughly a thousand rounds through, so today I opened it up. Bolt face: 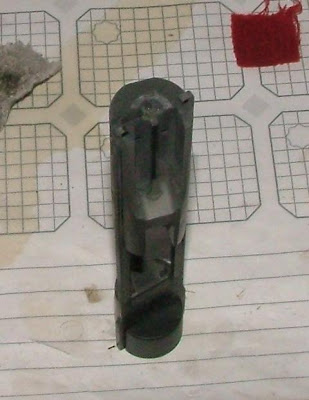 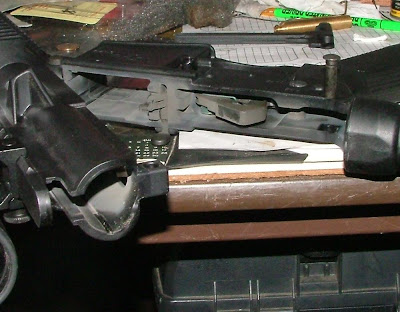 Fairly filthy with .22 fouling, most of which wiped off with a damp patch(trying Strike Hold this time). Not nearly as dirty as this AR15*, but standard 'not cleaned in a while' .22-level.

I found a BSA .22 scope stuck in a corner(found on sale somewhere) and stuck it on for testing ammo. Now I need a calm day at the outdoor range so I can try this at 50 and(hopefully) 100 yards. Want to try the Fed Auto Match in the Martini, too, see if the promise of that one group holds up.


*That's the dirtiest I've ever seen. The second-dirtiest firearm for me was a Marlin model 75 sold cheap because it wouldn't function. Reason it wouldn't was, from the looks of it, whenever it started getting sticky they'd just spritzed some oil- motor oil, from the smell- in and kept going. That's the only .22 I've ever had to actually soak the works in solvent to clean: grey sludge caked on/in EVERYTHING inside the receiver. Kind of wish it was still mine, as after cleaning it was a very reliable and very accurate little rifle.

I have to note that this scope kind of sucks. Big problem is that it's VERY picky about eye relief: get just a touch too far back and everything outside the center of field gets blurry. REAL blurry. But it holds zero, so I'll give it a try for this.
Posted by Firehand at 06:55