The further story on the bears

The two grizzly at the zoo have in their enclosure a pool and a long canal. The slightly smaller one found a sport bottle somene either dropped or threw in and was having a ball with it: tossing it, slapping it around and so forth. He chased it all the way to the end of the canal where it fell in. And he jumped in after.

While he was playing with it, the other took notice and came trotting over with a "What you got?" look on his face. Which led to him sliding in and trying to take it. Upon which the smaller one stuck it into the drain pipe in the wall. 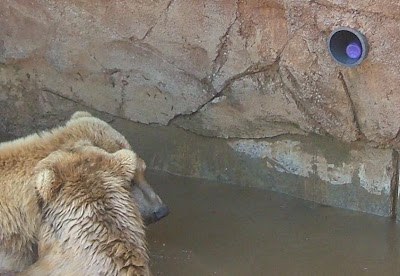 It took him two tries, but he held it in his teeth to get it there, then shoved it in with a paw. The bigger one shoved him out of the way and took a look. 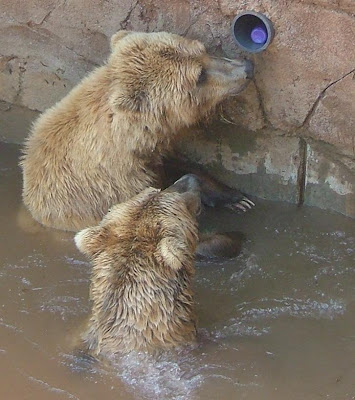 It really seemed to tick him off, as he jumped on the other. They argued a minute, then he looked again and spent the next five minutes digging in to try and pull it out, taking looks, and trying again. Finally gave up.

I'd never have thought one of them would do something like that, but he did.
Posted by Firehand at 19:47

OH MY GOODNESS!! They are so cute. Just look at them, you can practically see the one looking as if he is saying, "Go on...GET IT!! Don't give up!"