No, not the bullets you load into a pistol case and fire with primer alone, a plastic bullet that you load with a light powder charge and shoot. I read about these in a post at The High Road, looked up the site and decided to get a bag to try out. 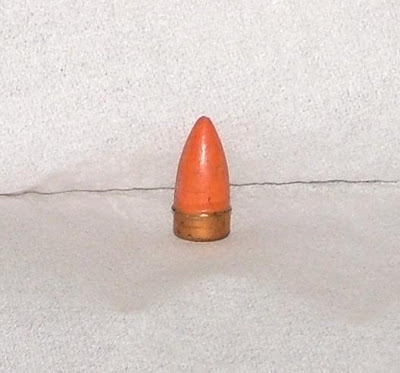 They're some kind of hard plastic with a copper gas check on the base, .30 caliber, weigh 19 grains and are .660" long. The company had no load information, and the guy at THR said he'd tried them in a .308 with 'a few grains of Bullseye'. I decided to try them with 2400: I've had good results with it and it goes through a powder measure a lot more smoothly than Bullseye tends to.
DISCLAIMER
This is completely new territory, I just picked a powder I thought suitable and a weight to start with. I make no guarantees for my own loads on this, or anyone trying them.
I mean it, dammit.
I decided on 5.0 grains and loaded ten rounds of .30-30. The plastic body extends slightly out past the gas check, so you'll have to bell the case mouth a touch so as not to shave any off, same as with cast bullets. I seated these so the gas check was just a touch below the mouth, then did just enough crimp to close the bell, not enough to actually crimp onto the bullet. Was able to try them today, on the 30-yard range at H&H, target below: 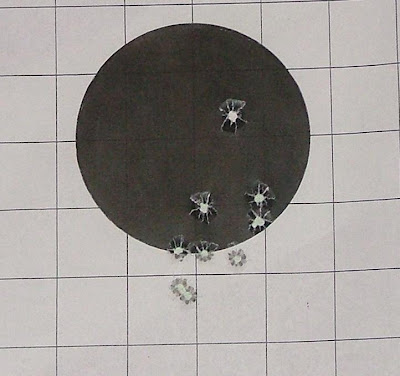 Not a hugely impressive group, but I will note that this was iron sights on a range where the target line is a bit dimly-lit, and only a forend rest. I think with better light I could have held them to a tighter group.

Noise was low, which you'd expect with that load in a rifle, and recoil was pretty much non-existent, no more than a .22. For introducing a kid to a .30-caliber rifle these would work very nicely, give them a chance to handle a 'big' rifle without worrying about recoil. And a bag of 100 runs $5, so cheap bullets for light practice loads. Not bad.

Added notes:
The gas check itself runs right at .308" on the several I checked with a caliper: the body of the bullet right above the check considerably larger, ranging from .311 to .314.

Cleaning was standard, a couple of patches with bore cleaner wiped through, then a couple of dry.
Posted by Firehand at 18:30

Did they mic out at exactly .300 inches? If not, where? Might be interesting to build some quieter loads for the Mosin...

When I was a sprog, I had an old M94 .30-30 that I shot out of my bedroom window with a 50/50 mix of beeswax and paraffin canning wax. I mixed it in a coffee can, then poured it into an old cake pan to a depth of about 3/8". I pushed the unsized, deprimed cases in to fill the necks. After priming, the wax pellets had enough velocity to punch through the side of a pine apple box. They also raised hell with pigeons (sky rats) and with a good (lucky) shot, I could snip the head clean off out to around fifty feet or so. Quiet enough not to annoy the neighbors, too.

Sounds like a pretty good "gallery shooting" load. I've read that some folks used a light "squirrel" loading for a .30-30, that was .30-6-100, which IIRC translates to 6 gr powder with a 100gr bullet. The cases had a crimped ring around the neck, to differentiate by sight and feel when loading the gun. Here's a page, showing that a .30-30 owner could use his rifle for more than just large game.

I read years ago of a load a guy used for squirrels & rabbits around the house. It was in .30-06, he used one or two grains of Bullseye and- as I recall- a 0 buckshot. Belled the case mouth enough to seat it, then crimped just enough to hold it in place. Said it was very quiet, and quite accurate out to maybe 20 yards.

Jet, now that you mention it, might load a few for the Mosin and Enfield, just to try.