but this part of the state got off easy. Despite the predictions of doom, we got several inches of sleet and a little freezing rain.

Take Oklahoma east of I-35; now cut off the bottom, oh, thirty miles. What's left got really heavy freezing rain and a little sleet. Something like 100,000 people without power; not just lines down but utility poles down. And trees down, etc.

And to add to the joy, the skies cleared overnight, so we have
Cold temperatures,
No cloud cover,
Winds have dropped to nothing,
Lots of white stuff on the ground
all of which adds up to lots of radiational cooling. It's supposed to range from around zero in the northwest to mid-teens southeast the next couple of nights, with highs only in the twenties. Gonna be an uncomfortable next week or more for a lot of people.

The OKC road crews were out today, but not exactly everywhere. Some major roads are in pretty good shape, but a lot of primary and secondary roads that get a lot of traffic got no attention, including busy intersections that are solid ice with not even any sand thrown out. A few years ago the city made a big deal of putting up signs on a bunch of these streets that said something like 'Primary Snow Route', the idea being that since these streets got so much use they'd be the first ones either bladed or sanded. The first actual heavy snow/ice situation came and guess what? The city didn't do squat to most of them. And all those signs mysteriously disappeared(wonder how much that crap cost?)

It got up to 23 degrees, which means with traffic some roads melted partially to largely clear, although as soon as the sun went down they froze over. I've got a very pretty spinner hanging out that caught some of the drips which gives you an idea of the temp: the sun was low but still up and shining on it when I got home to find this 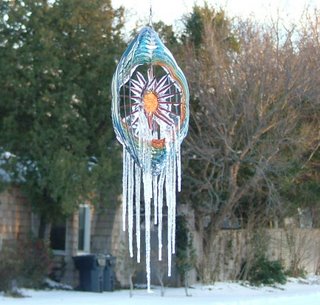 It's supposed to hit about 27 tomorrow, which combined with the normal workday traffic should do a lot toward clearing the streets. And if the wind stays down should help the people working on the power situation out a bit.

I got my sidewalk and part of the driveway cleared, aided by the partial melting and refreezing allowing me to use a mattock to break off slabs and shovel them aside; that ought to help the sun clear more of the driveway tomorrow. Damn near froze my fingertips, got so busy didn't notice how cold they were getting until I realized I couldn't feel them. Note to self: those gloves were not intended for work like this in these conditions.

I'm not looking forward to getting to work in the morning. What made today no problem was the holiday meant almost no traffic to get through, whereas tomorrow will be a pain in the ass if a lot of these people drive the way they usually do in conditions like this.
Posted by Firehand at 18:15