Pressley seeming to hit back at the criticism from the CBC et al: “We don’t need any more brown faces that don’t want to be a brown voice. We don’t need any more black voices that don’t want to be a black voice.”
"If you don't speak and vote the way we want you to you aren't REALLY black or brown!"  Oh yeah, that's going over well.

This is the same kind of crap a bunch of the Evil Party has been throwing at any minority group member who doesn't toe their line for years; now it's being used on them, and it couldn't happen to a nicer bunch of crapheads.


Speaking of leftist asshats,
The Communist Origins of Antifa


Yes, this is how stupid a bunch of the left has become:
Bernie Marcus and Arthur Blank, the two primary founders of Home Depot are both Jewish.

Marcus is also a huge philanthropist supporting everything from the Atlanta Aquarium to a foundation for developmentally disabled children. 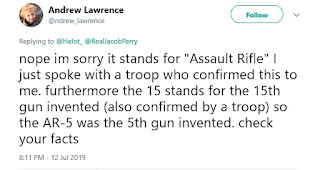