Translation: "I say whatever will go over best for the audience I have."

Hillary Clinton told top banking executives that she has “both a public and a private position” on Wall Street reform and is reliant on wealthy donors to fund her campaign, leaked excerpts of the former first lady’s speeches seem to show, fueling claims of hypocrisy on the part of Mrs. Clinton at a crucial moment in the presidential campaign.

The release by WikiLeaks, which the Clinton campaign has said it will not confirm, appears to show Mrs. Clinton discussing how she seeks to “balance” her public rhetoric on Wall Street reform with her actual positions, and with the reality that wealthy bankers and investors must partner with government to enact change. The documents also show the former secretary of state admitting that she’s out of touch with average Americans and is “kind of far removed” from the lives of the middle class.
Only possible comment: 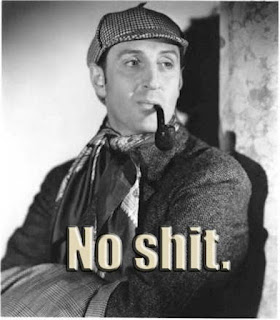 Wonder if the Sanders supporters and the Warren minions will admit any difficulty with all this?

Consistency is the hobgoblin of small minds. Hillary is a master at weaseling and her supporters seem to regard this as feature not bug.

The Picture.....How many times have you said,"No Shit Sherlock!!" as a comment to your friends.....Now I just have to stop laughing long enough to finish this post!!!!!!!