"The commoners can't be allowed to know about this,

they might say unkind things or something."
A French government committee has heard testimony, suppressed by the French government at the time and not released to the media, that the killers in the Bataclan tortured their victims on the second floor of the club.

Police witnesses in Parliament said they vomited when they saw the disfigured bodies.
The French have this, we have Dear Leader and "We may never understand the motive", they fire people who speak non-pc truth, and these clowns wonder why people don't trust them...


We also have the idiots at MSNBC: 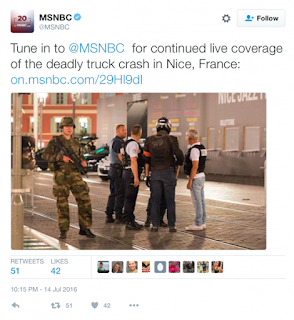 'deadly truck crash'.  Apparently noting it's a terrorist attack would send them into an attack of the vapors or something.

Islam is the problem, those who refuse to see this make the problem worse. The question is can Islam disavow forcible conversion? If not and if "peaceful" muslims continue to shield the violent among them we are left with a choice surrender or contain and or destroy the ideology and it's adherents. That is not a prospect any civilized man welcomes but I for one will not submit to Allah or to any man.

Two things: I don't really see anything intrinsically dishonest or wrong about not publicizing the torture. The U.S. suppressed torture and atrocity stories during World War II, for the good reason of sparing the families of casualties from the fear that their loved ones had been tortured by the enemy. And if you'll notice, all of Mathew Brady's dead-soldier photos are of dead Confederates. That's because he worked for Abe Lincoln.
And if you want to get technical, the incident in Nice really was a truck crash, just like the incidents in New York, Arlington, and Pennsylvania were plane crashes. They just weren't accidents.