The head of a UNHCR camp called Syrian refugees "The most difficult refugees I've ever seen. In Bulgaria, they complained that there were no jobs. In Sweden, they took off their clothes to protest that it was too cold.

In Italy, Muslim African “refugees” rejected pasta and demanded food from their own countries. But the cruel Europeans who “mistreat” migrants set up a kitchen in Calais with imported spices cooked by a Michelin chef determined to give them the stir-fried rabbit and lamb meatballs they’re used to. There are also mobile phone charging stations so the destitute refugees can check on their Facebook accounts.

It had to be done because the refugees in Italy were throwing rocks at police while demanding free wifi.
This is bullshit.  And, whether they realize it or not, dangerous.  Tam had a piece the other day that ended with
We'll see who cracks first, the guests or the hosts, but sooner or later, somebody's getting loaded into cattlecars, because that's how things go in Europe.
Especially when the 'guests' think they're owed deference to start with, and get nasty if the 'hosts' don't surrender fast enough.


From Miguel to the CSGV: 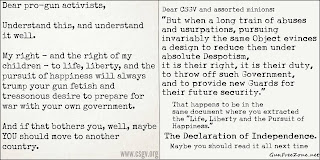 There are no sharks involved, but there's still lasers.


I'm remembering authors who took a long time to find someone who'd take a chance on them.  And one in particular who self-published because nobody would(they started paying attention after that).  So idiot statements like this...


If Jewish Americans do in fact value life, the past, and individual responsibility, then here’s a clear-cut pursuit: seize upon the right to bear arms, an elemental liberty afforded by the Constitution. I’m not suggesting that Jewish Americans need to stock arsenals in their basements. I’m simply recommending that, at a minimum, they familiarize themselves with firearms. And fine, if Jewish Americans don’t wish to possess firearms because they’re entitled to as participatory citizens, then they ought to for another reason: to prevent the recurrence of the extraordinary, which they themselves confess haunts the conscience.