With all the screaming about "RACISM!" right now

thought I'd pass along a true example found over on  Bookface: 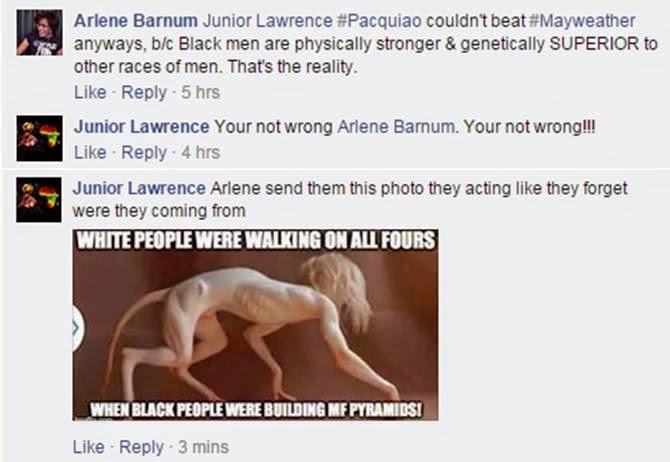 I wonder how these clowns would react to being told that a lot of Egyptians(and Arabs in general) really don't like blacks?  And would consider being called black a serious insult?

Of course, it could be that someone will explain "They have no power, therefore they CAN'T be racist", which seems to be the default excuse for crap like this.

It is true. On average black people are genetically programmed to be stronger and faster than other groups. Comes from evolving on a continent where almost everything wants to kill or eat you. Pointing out this reality of course will lead to you being called a 'racist'.

It is also 'racist' to point out that on the spectrum of IQ averages blacks usually are the lowest as an ethnic group. Again, this is a biologic and genetic reality, but point it out and there will be hell to pay.

But when you have no real accomplishments as a culture or ethnicity the only thing you have left is anger, finger pointing, denial and usurpation.

Shouldn't that be "black people were using slaves to build the pyramids"?
Storyteller

So in sub Saharan Africa after the colonialists left, any white people left there can't be racist since the black people there have the power?