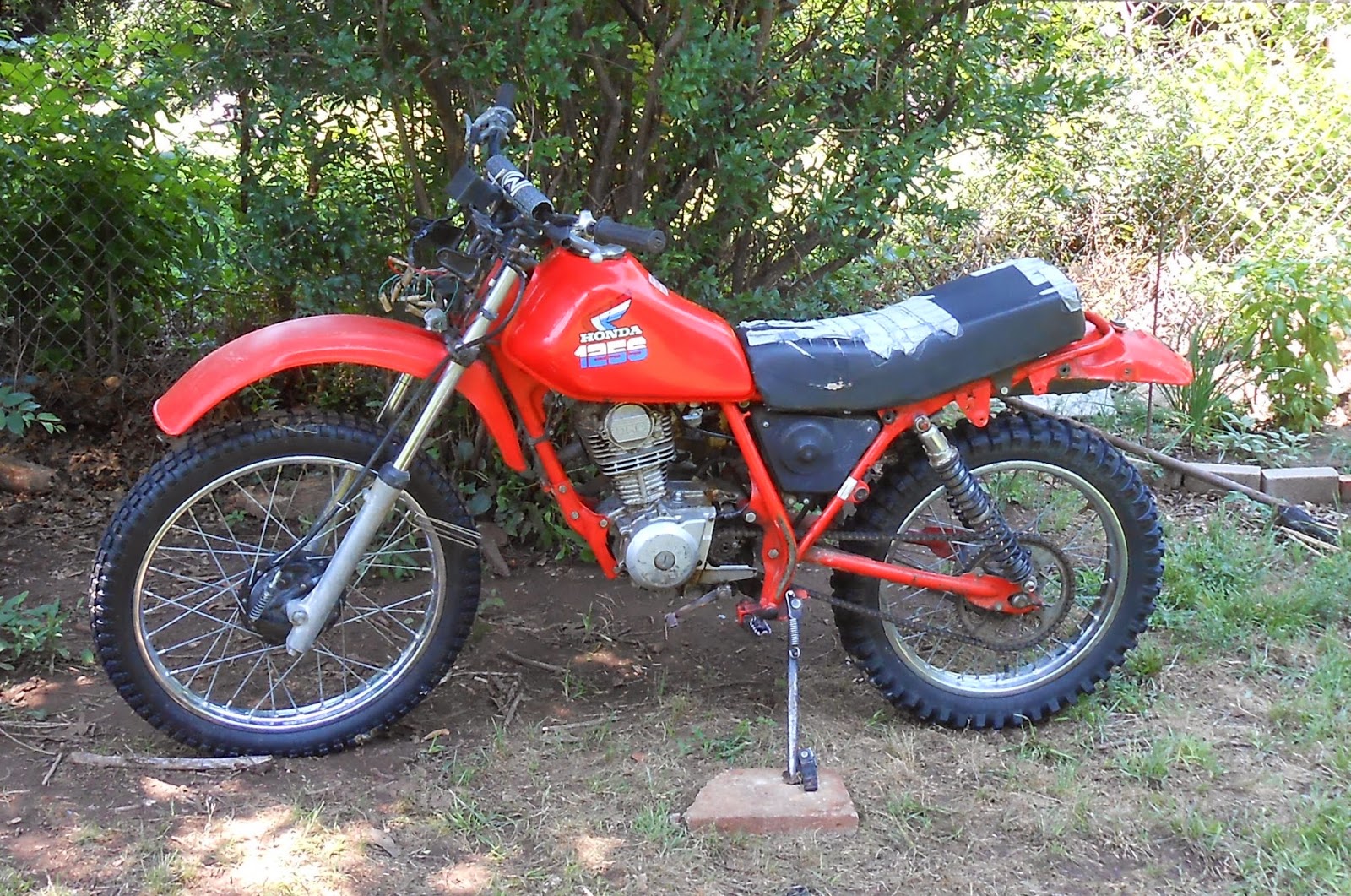 I'd been looking for a small bike to mess with, and thanks to son now possess this: mid-80's Honda XL125.

I wanted something not falling apart, that could be worked on/fixed/repaired and used, and this fit the bill perfectly: the engine actually runs, it definitely needs work but it's all stuff I can do, and it was cheap.

The engine is a single-cylinder overhead-cam four-stroke 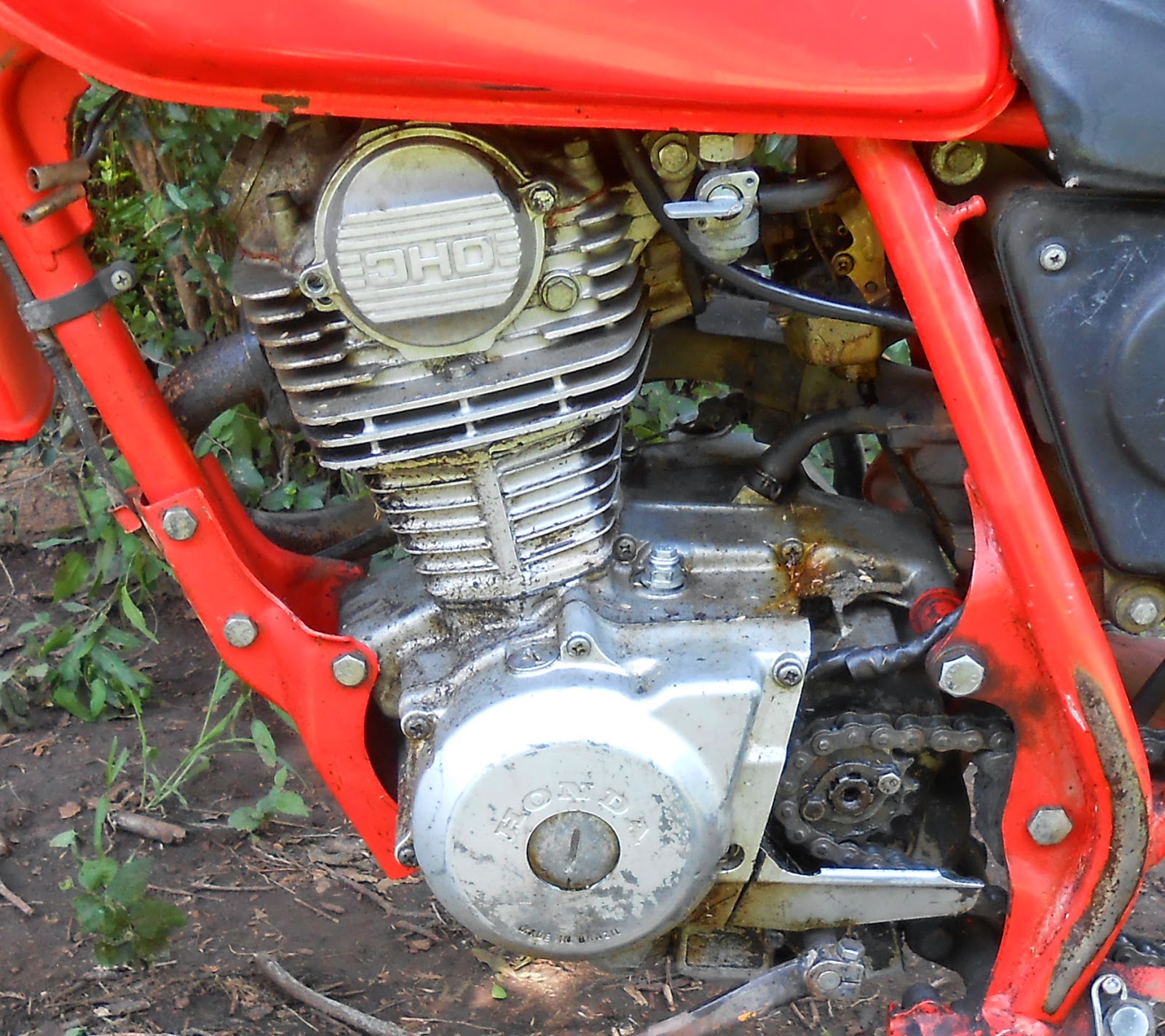 which, as noted, runs.  But it do need work.  From the sound the cam chain tensioner and guide are probably shot, which means a good chance the chain needs replacing as well.  Otherwise, in pretty good shape.

No, I'm not missing that piece of case that's not there over the drive sprocket; it doesn't involve a seal or gasket, so not really worried about that; can always fabricate a piece to fit over and screw or weld it in place.

I got started on this before thinking "You know, I should take pictures and blog this!"  Rundown as follows:
The gearshift lever was bent(common); a little time with a torch, vise, big crescent wrench and hammer reshaped it nicely.  Yes, I took it off first.
It originally was street-legal, but most of the lights were gone.  Since I want this for trails and such, I removed
the rear turn signal bases and bracket,
front turn signals(non-working),
headlight case(thing was covered with electrical tape, because what was still there was badly cracked),
and most of the wires for the above(more to go as I trace them out).
The battery was there, but dry and dead.  It went, and the battery box, fairly sound but rusty.  Without lights it'll run without the battery, so there went that weight.
See that yucky stuff on top of the crankcase?  There was a little crack in the fuel line; that's been replaced.
Took the front wheel off to inspect the brakes; about half their life left, and working normally.

The rear brake was a different matter 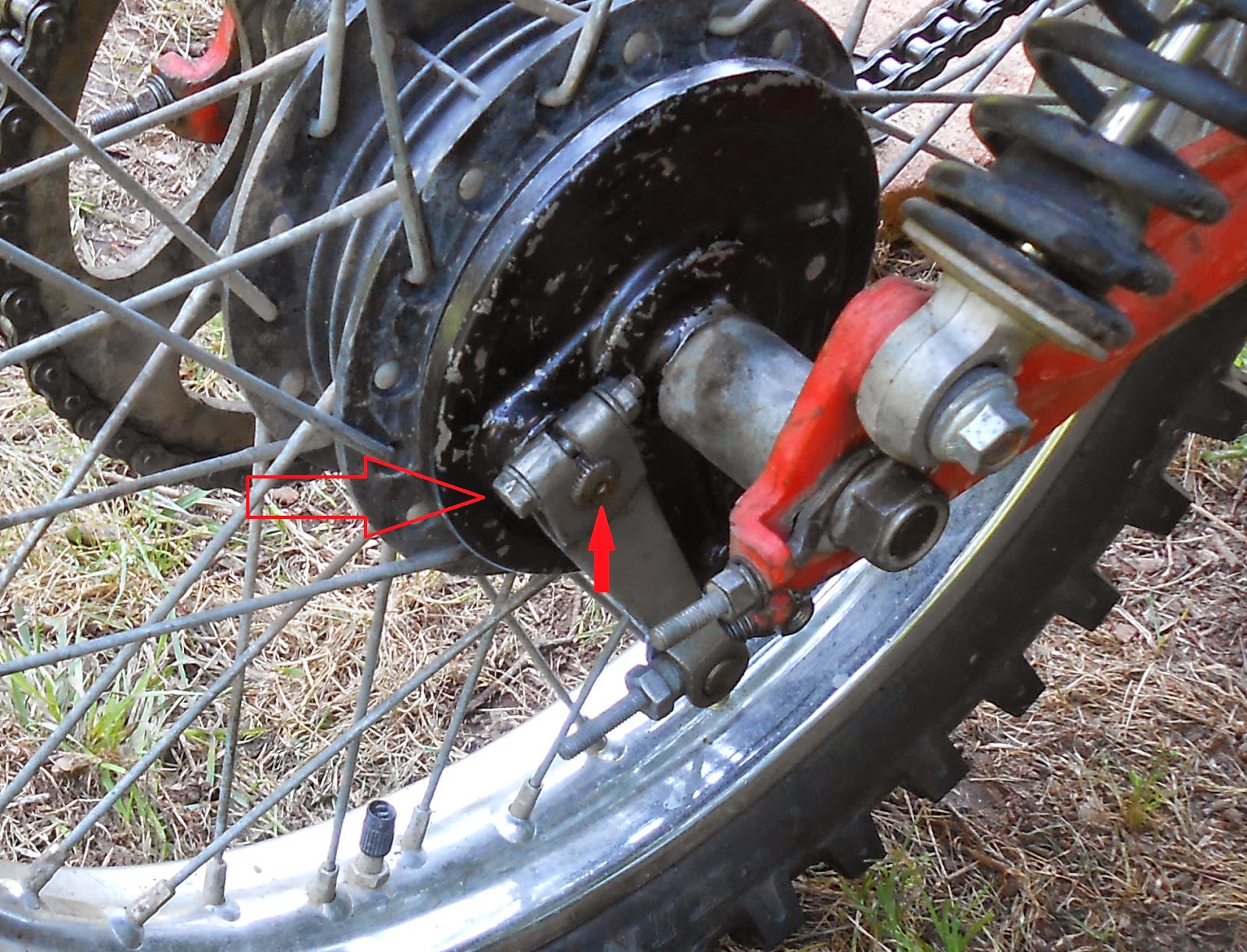 Drum brake, shoes inside the hub.  And it was stuck; wouldn't engage at all.  So removed the wheel(no, I'm not taking it back off for pictures) to inspect things.  The shoes were fine, the problem was the shaft.  See the lever with the hollow arrow pointing to it?  When you step on the brake pedal, it pulls on that, the shaft(solid arrow) rotates and forces the shoes apart and into contact with the hub*.  Except when it won't rotate.  That sucker was stuck.  Had to put some penetrating oil on both sides where it enters the side plate, then put the lever back on and start working it.  Which required clamping the plate in a vise.  Once had it moving fairly well was able to get it out.  Looked like last time it was ridden some muddy water got in there, and since the thing had been sitting for a long time had dried; a little rust, but mostly seems to be dirt.  Cleaned that off the shaft and out of the hole, lubed, reassembled and it works as it should.

The chain was in pretty good shape, once cleaned and lubed.

I mentioned that it runs, but didn't run very well.  Big problem there was the air cleaner.  On lots of bikes the air filter is a piece of foam that fits over a metal mesh support; you oil the foam, so the stuff the foam itself doesn't catch is trapped by the oil**.  Thing is, it's supposed to be lightly oiled, not 'squeeze the foam and it drips' oiled.  Cleaned the foam, cleaned the mesh(which was also oily as hell), let them dry and then lightly oiled the foam.  Between that and fresh gas, it runs a lot better.

Big thing is going to be finding the cam chain parts, pulling the engine and replacing them.  During which I'll also clean the carburetor thoroughly, and hope I can get everything back together correctly.  Then, over time, clean and repaint the frame and tank, and whatever else needs doing.

We'll see how it goes.

*If you're not familiar with these, the inside end of the shaft is flat.  The brake shoes fit on a pin at the bottom, and the top ends go on each side of the flat.  Shaft rotates and forces them apart.    Put just a dab of grease on the flats(making damn sure not to get any on the braking surfaces) and it'll help smooth things out.

**They make special oil just for the purpose; spray it on, let it soak in, and when the carrier evaporates it gets really sticky.  You can use motor oil in a pinch, which is what I did for now.

One of the things that destroys older entgines is Ethano in the fuel (Thank you E Effin' PA) So. here's a link to some easy living for small engines and engines in older machines.

Give it a look. I just got a '77 Chevy G-20 camper van, it was almost out of fuel so I filled it with 0-E gasoline and it felt as if it had a fresh tune up by the time I had driven a mile. We'll see what happens to the fuel mileage over the next week. I'm going to a Rendezvous.

By the way, my lawnmowers, genset and outboard all love the 0-E fuel, scres the E effin'PA, those bastiges don't have to pay for my replacement machinery when the engines fail.

Happily, there's a number of stations around here that sell straight gas. That's what I use in the bike(s) and mower and such.

I've known/known of too many people with engine problems that were caused by ethanol mixes.