That metallic 'clack' you just heard and felt?

It was every rifle in Finland being function-checked.
One of Russian President Vladimir Putin's closest ex-advisers has claimed that the ex-KGB agent ultimately wants to reclaim Finland for Russia.

Andrej Illiaronov, Putin's economic adviser between 2000 and 2005 and now senior member of the Cato Institute think tank, said that "parts of Georgia, Ukraine, Belarus, the Baltic States and Finland are states where Putin claims to have ownership."
...Illiaronov admits that Finland is not Putin's primary concern at present but, if not stopped in other areas of Eastern Europe, the issue will one day arise. Russian troops are currently massing on the eastern border of Ukraine, following Russia's recent annexation of Crimea.

How many descendents has Simo Häyhä?
And are the Russians stupid enough to want to find out? 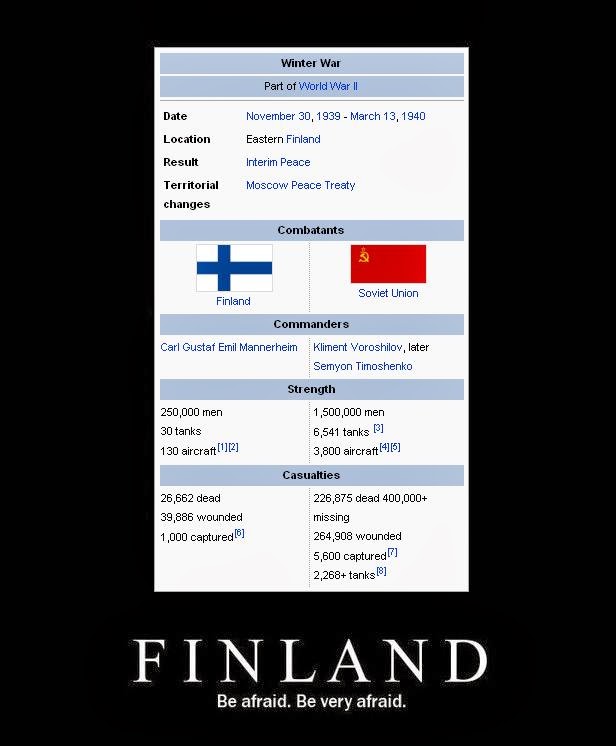 we, all the western governments, are repeating the mistakes of the late 1930's. appeasement doesn't prevent war, it ensures it!!

We still do have people who might measure up to that generation. We also have lots of people with stupidly leftist let's make love not war and being nice can ensure others will always play nice too opinions. You do know about Finlandization? The effort to pacify the bear by appeasement, and doing everything possible to make it think that they no longer needed to think of something like conquest because they'd get what they wanted from us anyway? That did include propaganda aimed at the younger generations, propaganda which I had to endure in school and which the people who are now teachers embraced.

The end result has been that there are lots of idiots with no clear idea of how the world really works here.

The spirit may still be there, if deep underneath, but we may now lack the practical skills and smarts which made the miracle of Winter War possible. I hope I'm wrong, but I'm not feeling overly optimistic.

Dennis,
I think it is intentional - I don't think politicians on either side want peace.

Baz O'Keynesian, your commie in chief, appears to be exactly the sort of narcissist who'd happily sacrifice entire nations and generations to be remembered as a "great leader".

We've seen it before, The Brits gave the impression to a bunch of Argentine generals who were days away from economic collapse and riots - that they could stage a triumphal invasion of the Falkland islands without repercussion

That little bit of engineering turned thatcher from a hugely unpopular one term failure into someone feted in the same language as that monster psychopath, Churchill.

Just 70 years ago, western leaders were happy to use entire fleets as bait to start a war, and happy to ignore peace overtures for 7 months in order to use nukes on populated cities.

The fire bombing of Dresden was conducted when Germany was already in an irrecoverable position - it served no military purpose.

According to Litvinienko, Putin's men were blowing up occupied apartment blocks in order to justify the first Chechen war.

Don't think that "our leaders" are any less psychopathic.

It's well worth reading Ralph Raico's "great wars, great leaders?" Raico doesn't believe in copyright so you can download it for free from mises.org

If the smell coming from Russia is any indication, about half of the Russian Army just ruined their underwear - and not in a funny way.

If Putin does order an invasion of Finland, they most likely would win - by sheer weight of numbers - but I'm certain that it would be the most costly victory in Russian history.
A victory that Putin would NOT live to see.
Cheers.