It's always so nice to find yourself happy

with something you bought. Yes, I'm referring to the K22.

Not quite a year ago, at a show I saw what appeared to be a N-frame S&W in .22. The finish was awful; no pitting, but discolored badly. But the action was tight and smooth, the bore and chambers bright. I decided that, while I had just enough, I shouldn't oughta do it. And I've been kicking myself ever since. So when I ran across this one, I went back, looked it over further, did a bit of talking and bought it. Hit the range after work to try it out, and found myself having gone through three boxes by the time I had to leave. Took care of a couple of other things, too, but this was the primary.

Had to adjust windage just a touch, and then shot. A bunch. This is about typical, mix of single and double-action fire at ten-twelve yards: 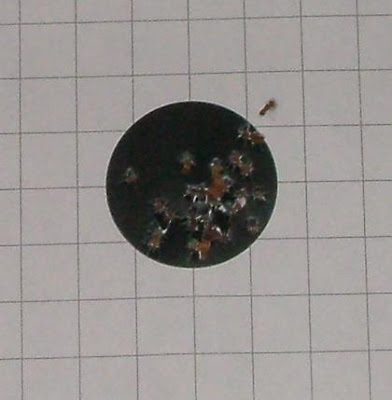 The double-action is just wonderful, smooth and clean. And the single-action... almost an orgasmic experience. Well, not really, but it's really nice: light, clean no perceptible motion when it breaks. Let me put it this way: I'm a fairly lousy one-hand pistol shot. Some I can do fairly well, but it's not my strong point. Just as I was about to leave I loaded six and ran a last target out to ten-twelve yards. So the target's hanging out there, still moving slightly, and I fired six rounds single-action, one hand 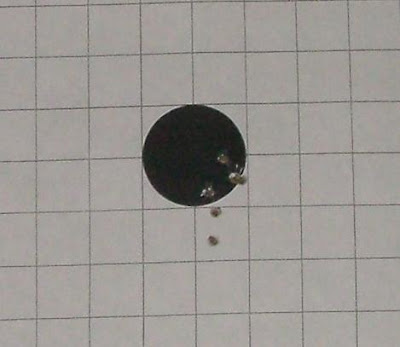 For me, that's bloody amazing. Especially after all the other shooting, and when I'm hungry.

The library turned out to have the 2nd Edition Standard Catalog of S&W, and I picked it up today. According to the number this one was made 1951. Everything matches except the round butt; as Tam says, no mention of any. I think she's right, that someone converted it. The grooves in the backstrap are faded out partway down, as if from there down was ground down. The profile seems to perfectly match what a factory round butt would be, and the backstrap curve matches perfectly; and it was very well and properly polished. Whether it went to a smith or someone did it themselves, it was very well done. And I think I actually prefer it to the square; fits the hand very well. In any case, it's mine. And, like I say, it's always very nice to find yourself very happy with something you get.

I learned what Tam meant by a 'pile' of brass' by her; had there been more time, there'd have been a bigger pile.
Posted by Firehand at 19:06