Jimmy Carter was elected in the first Presidential election I could vote in. I was just getting really interested in some parts of the politics of this country, and I wasn't happy about his winning. Not that I was really happy with Gerald Ford, but I was even less thrilled with Carter. 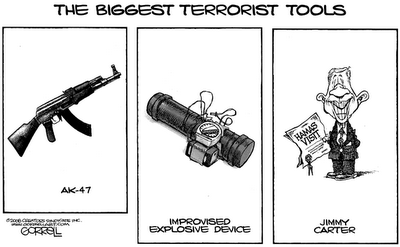 Then came a whole lot of things that took me from not being happy with him to flat-out disliking him. Two things in particular:

The first was his attitude of "Don't blame me because a bunch of things I've done haven't worked out; if you had the right attitude, things would be fine." His willingness to believe every dictator and terrorist around and smile and make agreements with them- even knowing they'd break them- while, at the same time, crapping on our allies... A while back someone wrote that they thought Carter was the first 'process' President: didn't really seem to matter if the outcome was good as long as he thought the process was properly carried out. Which is one of the most idiotic things I can think of, but it fits*.

The second was the treatment of the Shah of Iran, and his actions leading to, during and after the Iranian Revolution and the hostage crisis. That's been gone over many times, I'm not going to review it here.

I'd not had any opinion of his wife, Roselyn, until one day back in the early 80's when I happened to change channels one day and she was on the 'Donahue' show(I was bored, so shut up). It was kind of amazing. She'd just started in on President Reagan, and the venom that came leaking out was shocking to me. Main line I remembered was her venting on the hostages being released just as Reagan was inaugurated and that it was generally accepted that the Iranian government figured Reagan would stomp on them, hard, in some way. She went on a tear about "Jimmy could have bombed or shot or something, but WE tried to do it the RIGHT way. And then Reagan came in and threatened people and messed things up." Not exact words, close as I can remember. It was just amazing.

Then Carter started working with Habitat for Humanity, which was a good thing. Then came Nixon's funeral and after that he seemed to be driven to DO SOMETHING. So he got in Bill Clinton's face, and George Bush's face. He started 'certifying' elections, as we saw in Venezuela he was on camera saying "This election was fair and open" while the other international observers were comparing notes on what a crooked election it was and their statement on it; from what I understand, they were seriously pissed at him for it. Which didn't matter, because he got his picture with another dictator who said what a fine fellow he was, and every jerk around the world who hates the US could point to Carter saying how we'd messed up the world, etc.

And now, on top of everything else, this clown goes to meet with terrorists. Despite damn near begging from various people not to. And he lays a wreath on the grave of one of the worst terrorists of modern history. 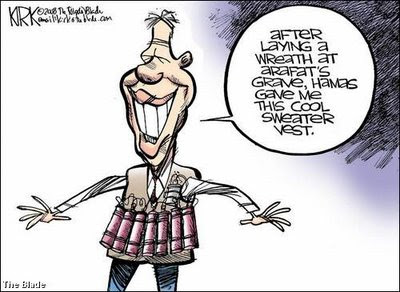 I don't have great hopes, but it'd be really nice if he was censured by Congress. And his passport yanked. Most likely won't happen, because Pelosi & Reid & Co.(Flying Monkeys Inc.) don't seem to have a real problem with what he's doing.

But this idiot needs some kind of a kick in the ass.

Thanks to Theo for the cartoons

*Lady I used to know had much the same mindset: she thought Carter was one of the greatest presidents we'd ever had because of 'all the international agreements he signed'. Didn't matter that they were generally broken right after- sometimes during- the drying period of the ink; I actually asked her if it bothered her that they'd been broken: answer was yes, but at least he did sign agreements. Freakin' insane.
Posted by Firehand at 14:42

That last carton reminds me of his presidency, how during the energy crisis, he's pictured in the White House extolling Americans to turn down the thermostat and put on a sweater.
Speaking of "energy crisises," I wonder how the libtards would take it if Bush instituted rationing and restricted buying days like Carter did. So far I haven't seen ANY signs at the gas stations saying "no gas today."

I know so many people who could use a vest like that. How much are they going for? LOL!