Was able to hit the range this morning before it started heating up(hot again the next couple of days, then another front and chance of rain). On the most basic factor, the light did not fail: it didn't break, burn out or otherwise fail to operate. The cord didn't come unplugged and the switch operated as designed with no problems.

Had one problem; the bracket will indeed fit it to most any barrel or round magazine tube, but the inside is smooth, and after about ten rounds of assorted buckshot I noticed the light had slipped forward under recoil, and another two or three rounds would probably have slid it out of the bracket 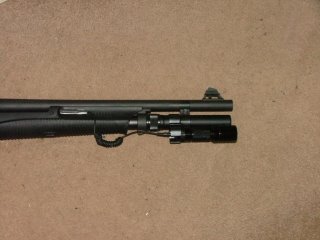 You'll notice that only the tailcap is now the only part in the mount, not a good thing. If you planned on sticking the thing on and not taking it off unless work were needed, you could dose it with threadlocker. I think I'll get the dremel out and a cutoff wheel and cut some grooves into the sides of the mount where they contact the light; they'll catch with the knurling on the barrel and should hold it in place. Yeah, something with a Picatinny rail on the barrel or forend would be best; it would also be considerably more expensive. If you need/are willing to pay for that, you'll get no argument from me, quality always costs. For general home/homestead defense where you don't need or want a full LE/military-grade tactical light setup, this isn't bad at all.

Back at the last gun show I'd picked up some shotgun ammo I wanted to try, so did that today too. These were fired offhand at 25-30 feet. First up was some Winchester Ranger low-recoil 00 buck: 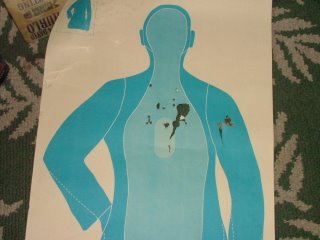 This load has a full nine pellets, and when they say low-recoil they're not kidding, noticeably lighter recoil than standard loads. That's two rounds, the big holes in center left and left arm are from the wad. Group about 3.5x4", not bad at all.

Next up was some Federal Tactical #4 buck, 27 pellets per shell 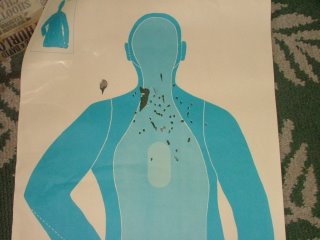 Again, two shots. Group about 6x6", recoil like any other standard buckshot load. 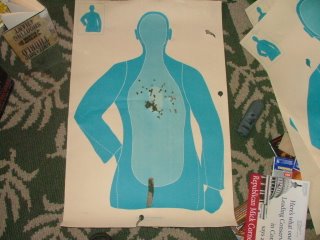 This time I fired five rounds. This was roughly 5x5" for the groups tighter than any other standard buckshot load I've tried and MUCH tighter than the S&B 00 buck. Note that the wads moved a lot further from the shot than the other ammo.

So the light is a good deal, and the slipping in the bracket can be fixed. For home defense, from what I've tried now personally I'll go with either the Hornady TAP I tested before or the Ranger 00: less power than standard loads and with the Hornady one less pellet, but faster recovery and, face it, if a solid hit or two from these at home/yard ranges won't stop somebody, you've got BIG problems.
Posted by Firehand at 12:05