All the bits & pieces you can find. At the one last weekend there was a man with a table covered with a mix of crap and actual usable stuff. Scope bases, rings, parts thereof among others. Which gave me an idea.

I've been wanting to try putting a red-dot on an AK on a forward mount like the Ultimak. However, I didn't want to spend a hundred bucks on one before finding out a: if I like the setup and b: if the rifle would be accurate enough to make it worthwhile. I've fired this one before and had less than amazing results: at 100 yards it remided me more of a 'pattern' than a group(See, Gerry, it happens to me too! Damn grav anomolies). I couldn't be certain if it was that the rifle needed work/was hopeless, or the sights. That short sight radius with the very basic post & notch, with my eyes anymore, is not the greatest aid to accurate shooting.

On the table, among other things I picked up, was a beat-up old B-Square scope mount for some handgun. Too long, but it could be cut down in length, and messing with this would be easier than some of the other ideas I came up with. And, everything on the table was $1. Yes, that's right, one lonely dollar, so step right up! Lay down your money an- ahem- sorry 'bout that. So it and some rings & stuff went with me.

Finally got a chance to mess with it this evening. Cut to length, cleaned up the ends, had to spread it open a bit so it would fit onto the gas tube, and voila! 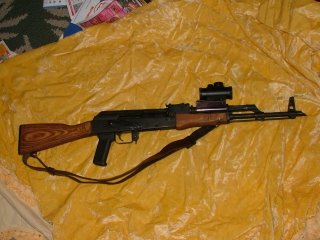 or however you spell it. Little closer view: 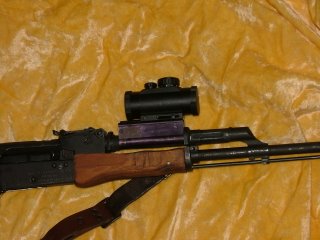 Seems pretty solid, and from just aiming & dry-firing I think I like it. It won't co-witness the iron sights, but that's not a big concern. If the light's good enough to use them, it has enough gap between the tube and the bottom of the base that I can squinch down to the usual position for this thing and see the irons. I should be able to take it to the range soon to sight in & try it out, so we'll see how well it works.
Posted by Firehand at 18:00