for the first time this year.  I had a bunch of loads that had been sitting for months, and finally shot all but one set of them.*  Some worked out as 'Not again', a couple of 'Try this again', and one "Oh hell yes, try it again!" 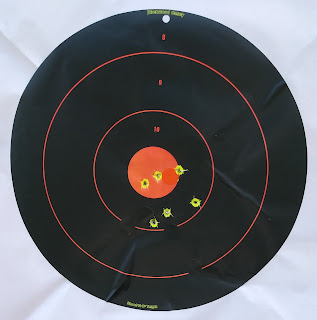 Previously I'd been using 65.0 2f Goex powder until the supply went away; I lucked out and caught Buffalo Arms with a shipment of Swiss having come in.  From a lot of reading decided to try the 1.5f instead of 2f; lots of reading had shown a lot of people finding that Swiss doesn't like a lot of compression, so for this I reduced it 5.0 grains, which gives just enough compression that I can feel it when I seat the bullet.  That's 3.5", and I'm pretty sure the two-line distribution is my fault in sighting, I think the group would've been tighter had I done all shots the same.  This will definitely be tried again.
It got a bit hot and windy, but the wind was straight down the range, and it didn't feel bad on temp to me.  Wore myself out with all the walking(no, you can drive to the 200 yard line), and it was worth it.

*Somehow I overlooked the box with these.  Dammit.
Posted by Firehand at 07:15