Woman is attacked by a armed repeat offender

Woman has carry permit and is carrying, and shoots the bastard.

Leftist whines and moans about how horrible that she shot him. 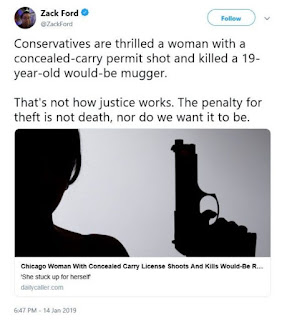 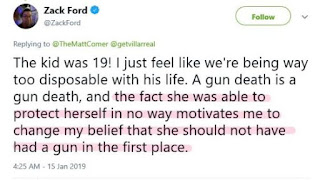 Asshole finally gets the idea that people consider him a fucking idiot, does multiple-part apology which includes this:
5. My ideal is for a world in which guns do not have to be a part of anyone's daily life and in which gun deaths are not a part of our daily news. I stand by this ideal and disagree with the proposition that more guns will make people safer.
A: It made her a lot safer.
B: I'm thinking this asshat is one of the idiots who believes that if you get rid of guns, violence will cease.  Or thinks that being bludgeoned/strangled/beaten to death isn't that big a wrong since an icky gun isn't involved.

Possibly what finally got through to asshat was all the people in the neighborhood ready to pick her up for a victory ride; it's a little more difficult to stir up crying and moaning from people who're sick of being preyed upon by vermin like the deceased.
Posted by Firehand at 19:14

I do hope that someday he gets the chance to put his money where his mouth is, metaphorically. And I hope he survives long enough to contemplate the error of his ways.

I know, lets call it a "Ballistic Post Natal Abortion".
The lefties will all want one now. Because, you know....... abortions.

When guns are magically disappeared then size, strength and violent nature will rule.

One of the things that pissed me off about his 'apology' was this:
'3. My tweet also ignored the context that this took place in a neighborhood with high rates of violence. That's an experience I don't have and shouldn't speak to. For that I also apologize.'
So, if the armed criminal had attacked the woman in a different neighborhood, THAT would make her self-defense a horrible thing?

And note the "I have not experienced this, so I should not speak" PC bullshit.

The way that this liberal as*hat flopped from his original stance to apologizing for it (after he encountered many differences of opinion from his), shows to me that he has a loud mouth and a spine of cooked macaroni; all very typical for a Leftist, and for manginas who've been raised by a single/divorced feminazi mother.

There was a time when there were no firearms. We call it the Dark Ages.