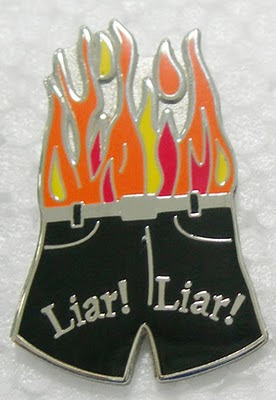 In direct response to a question from Univision’s Jorge Ramos as to who authorized the operation, the president said:

The problem with this statement, as the top-level Justice Department memoranda reveal, is that Holder knew gunwalking operations were occurring, that his direct reports were involved in them, and that he did nothing to stop them, or, based on evidence gleaned to date, to even question them. That his subordinates felt comfortable including him on routine reporting shows they assumed his tacit approval for their activities, that is, his authorization.

No other explanation is credible, including ridiculous new excuses which would show unprecedented incompetence if we are to believe that Holder did not read the reports from his staff, or that he did not understand a direct question put to him by Darrell Issa, or that the memoranda were talking about a different gunwalking operation!!!
and
And there’s another problem for the president, because his assurances have covered more than his attorney general not authorizing gunwalking. He is also on record asserting Holder did not know about it (as well as covering his own tracks):

I heard on the news about this story that…uh…Fast and Furious, where … uh … allegedly … uh … guns were being run into Mexico and ATF knew about it but didn’t … uh … apprehend those who had, who had sent it. Eric Holder is the attorney general, has been very clear that he knew nothing about this…

Documented evidence from the Justice Department now shows us this is just not so. So the questions now become:

Did the president believe what he was saying when he said it?

Did Holder lie to his boss as well as to the House Committee on Oversight and Government reform?

Or might we have probable cause to doubt the implausible assertions coming from the Chief Executive? Especially since the White House withheld releasing “an unspecified number of internal e-mails exchanged among three National Security Staff aides” because, according to its Chief Counsel “the [Executive Office of the President] has significant confidentiality interests in its internal communications."


From an interview Issa did last night, transcript at Sipsey Street:
Anderson Cooper: “CNN has obtained some of the documents that you and your colleagues have referenced and the Attorney General did receive some memos last year acknowledging the existence of Operation Fast & Furious, but only in passing. The Justice Department is saying basically, ‘Look, he receives dozens of reports every week, some more than a hundred pages. There’s no indication he knew of the problems of this particular operation that far back.’ Do you believe that?”

Rep. Darrell Issa: “Well, it’s difficult if at all possible [to] believe it. Additionally, there’s a spin going that when they talked about guns walking in excess were other programs. We’ve had testimony in front of our committee that says, ‘Justice never lets guns walk.’ And now we have written proof that they were concerned about the guns walking. They were concerned about the optics of press interviews in which they were going to talk about problems, including Brian Terry’s murder. And very clearly, this was not hundreds of pages of reports… He had to at least say, ‘I’m familiar with the name. What is it you mean?’ or that ‘I don’t fully understand everything as well as I did two weeks before.’ Instead, in fairness both to myself and to Jason Chaffetz, the Attorney General implied that he had never heard of this until two weeks before, rather than that perhaps he didn’t know what a felony stupid program this was that led to the death of Brian Terry and the release of at least 2,000 weapons into the worst of the worst people’s hands.”

Anderson Cooper: “I want to read you what a Justice Department official has told CNN cause they’re pushing back on what you’re saying. They said, ‘Chairman Issa, of all people, should be familiar with the difference between knowing about an investigation and being aware of questionable tactics employed in that investigation since documents provided to his committee show that he was given a briefing that included the Fast and Furious Operation in 2010 – a year before the controversy emerged.’ So I mean, did you, yourself know about the operation last year?”

Rep. Darrell Issa: “That is an outright lie that the Justice Department has been spinning. They shopped that to the newspapers until they found one that would print it. The fact is Kenneth Melson, a man who under oath very, very well recorded, has said he didn’t know about much of this, and clearly did not brief me in one briefing that was about gun trafficking into Mexico. And let’s understand something, Anderson. They would have you believe that I knew, that I knew what the Attorney General didn’t know, that I knew what they were deliberately withholding from ATF, DEA, and Justice agents in Mexico City and from the M- U.S. Ambassador to Mexico. So as this cover-up and this game of spin-and-delay continues, the problem is it’s only creating problems that didn’t initially exist. Initially, this was a dumb program that led to very adverse consequences. Now it’s about a cover-up, about deception, about slow-rolling discovery of this and other committees. Understand I got involved in this because Senator Grassley was denied any discovery because he wasn’t the Chairman over in the Senate, and I got involved somewhat on his behalf, and my committee has taken a lead on it. But this was about stonewalling of the Senate long before I got involved.”

To the Democrats now trying to say "BUSH STARTED IT!!!",
Rep. Darrell Issa: “Well, Anderson, we’d know a lot more about it except that’s among the documents we’re still waiting to get. What we do know about ‘Wide Receiver’ somewhat is very small amount of weapons, much more intensive following, but, in fact, we will get to the bottom of whether or not this practice in a smaller way may have begun on the Bush watch. We’re not putting it past any Administration and giving anyone a pass. The American people and the people of Mexico expect us to have a zero tolerance for letting drugs come into our country or weapons go into Mexico.”
"So knock off the bullshit and give us the documents."
Posted by Firehand at 05:06