The new symbol of the Office of the Attorney General

of the United States: 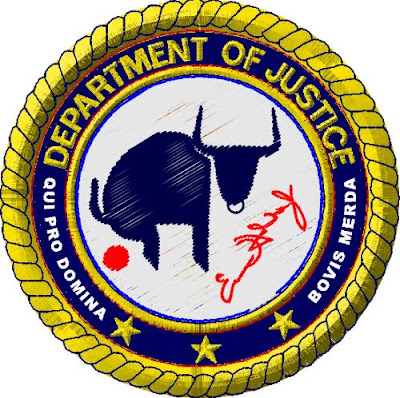 "The notion that somehow or other that this thing reaches into the upper levels of the Justice Department is something that, at this point, I don't think is supported by the facts," Holder told reporters.
Just look at that magnificent wording! Have you ever seen a finer example of a corrupt politician & lawyer trying very hard to be able to claim "I didn't lie!" ?

You can tell Attorney General Eric Holder​ is getting nervous about the Gun Walker investigation, because he’s sounding mighty defensive about it. . .

That’s one of those weird, plausibly deniable denials that signals extreme distress among the Washington herd. “I don’t think the notion is supported by the facts” is a far cry from “I absolutely deny that absurd allegation.” Spinning it as a political witch hunt would work better if Holder hadn’t spent so much time stonewalling the investigation. When House Oversight finally pries something out of him with a subpoena, the pages are so heavily redacted with black marker that they look like supermarket bar codes.
So, which do you think Holder is worrying about more: criminal charges or being thrown under the Obama bus(maybe literally) to try to keep the crap from that bull from splattering Obama?

Could that brief compilation of weasel words have been crafted any more carefully for escape clauses? And the “reporters” on the ground and in his face didn’t think to challenge it?

Holder questioned whether the congressional probe, led by Republicans in the House of Representatives and Senate, was politically motivated...

Does anyone even know if murdered Border Patrol agent Brian Kel…uh…Terry was a Republican or Democrat? How about slain ICE agent Jaime Zapata? Does it matter what political sympathies the estimated scores of dead Mexicans may have had, if any?

And since when is ensuring law enforcement compliance with the law a partisan issue? Weren’t walked guns found at crime scenes in Phoenix misused to endanger all citizens? Not to mention the untold numbers still out there?
This makes me wonder just what Holder & Co. know, or suspect, the committee knows or is about to find out. Or what evidence they've got that hasn't been made public yet?

'Yet'... isn't that an interesting word at times?

Found the links to the above at Sipsey


Also, on links to the White House, from Investors Business Daily:
Late last Friday, CBS News and the Los Angeles Times almost buried the news that Restrepo, the National Security Council's top man for Latin America, and two other officials, were in on ATF memos from the Gunwalker operation called "Fast and Furious."

That blows apart White House claims that it had no idea the Bureau of Alcohol, Tobacco, Firearms and Explosives was encouraging frontmen for Mexico's cartels to buy weapons from U.S. gun dealers — to "trace" them afterward.
That name just hadn't registered from past messes, but it should have:
Restrepo is a political operative whose interests are more domestic than Latin American. As a result, he's botched every Latin American operation he's had his hand in, appeasing enemies and blaming the U.S.:

• Honduras: In 2009, Restrepo was behind a U.S. bid to swiftly declare Honduras' constitutional ouster of its president "a coup" and sanctioned the country, playing into the hands of Venezuela's Hugo Chavez, who had attempted to make Honduras a colony.

• Cuba: Restrepo was behind loosening sanctions on Castro's Cuba, which has emboldened the regime to act against Americans. While Castro imprisoned Alan Gross, a U.S. contractor who was distributing satellite phones to dissidents, the Obama administration said nothing.

• Colombia: Its troops captured drug "kingpin of kingpins" Walid Makled, who had extensive knowledge of Venezuelan official involvement in trafficking. U.S. attorneys wanted him extradited, but Colombia's President Juan Manuel Santos said President Obama never asked. When IBD asked Restrepo whether he advised Obama to ask, Restrepo defensively said he did. But that's at odds with what Santos said.

• Venezuela: Treasury Department officials complained Restrepo kept names of high-ranking Venezuelan officials with ties to drug dealers off its "Kingpin List," in a naive effort to keep pressure off Chavez.

• Now Restrepo tries to pin Mexico's drug war not on Hugo Chavez's trafficker allies, but on gun dealers from the U.S.

There's little doubt that's his line, because blaming U.S. gun dealers and calling for a U.S. assault weapon ban were his ideas from his days spent at the Center for American Progress, an Obama-linked think tank.
But we're supposed to believe Obama & Holder would not know what he was up to? What orders and directions he was giving?
Posted by Firehand at 18:59