on cloud formation, short version: "It really doesn't mean anything(even though it does) and we wish we didn't have to release this information."

One could perhaps understand if all scientists were similarly gagged and prevented from interpreting the results of their research in ways that could be relevant for policymaking. However, the main problem is that many people who are trying to work on very different phenomena in the climate are not prevented from interpreting – and indeed, overinterpreting and misinterpreting – their results that are often less serious, less reliable, and less rigorous, perhaps by orders of magnitude, than the observations by the European Organization for Nuclear Research.

Moreover, this sentence by Heuer

One has to make clear that cosmic radiation is only one of many parameters.is really a proof of his prejudice. Whether the cosmic radiation is just one player or the only relevant player or an important player or an unimportant player is something that this very research has been supposed to determine or help to determine. An official doesn’t have the moral right to predetermine in advance what “one has to make clear” about these a priori unknown scientific results.

But then, as Lawrence Solomon reminds us, this was never an experiment the scientific establishment wanted to happen in the first place. 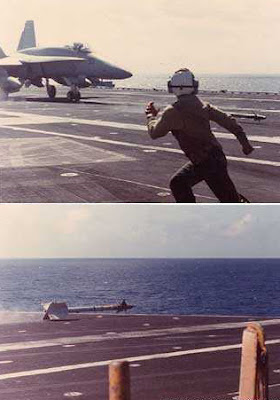 As an ex-QA rep and final checker for the F/A-18s of VFA-204, I can tell you that while not exactly a daily occurance, having an AIM-9 break loose during a trap is fairly common. Common enough that it's part of the standard flight deck safety briefings.

At least it's only an inert training missile.