Son is off with friends, so I'm sitting here all alone and browsing around, and found some stuff.

You know, he does kind of have that look...

I'd not heard of Cherry River Blog before, but Joe Huffman had a link to this on the Mumbai attack. One part:
The overwhelming characteristic of this attack was the dependence upon there being both an unarmed citizenry and an almost-unarmed, and unaggressive, local police and security apparatus. These attackers knew full well they faced no opposition whatsoever, a concept fully borne out in the real-life results. They were able to land, advance, control territory, move freely, and command local conditions with veritable ease. There was no opposition. They had practically nothing to fear, in terms of the success of the terror attack.
I'm reminded of this article from (fG)Britain a year ago on what disarming the honest has done; one of the important paragraphs:
We are so self-congratulatory about our officially disarmed society, and so dismissive of colonial rednecks, that we have forgotten that within living memory British citizens could buy any gun – rifle, pistol, or machinegun – without any licence. When Dr Watson walked the streets of London with a revolver in his pocket, he was a perfectly ordinary Victorian or Edwardian. Charlotte Brontë recalled that her curate father fastened his watch and pocketed his pistol every morning when he got dressed; Beatrix Potter remarked on a Yorkshire country hotel where only one of the eight or nine guests was not carrying a revolver; in 1909, policemen in Tottenham borrowed at least four pistols from passers-by (and were joined by other armed citizens) when they set off in pursuit of two anarchists unwise enough to attempt an armed robbery. We now are shocked that so many ordinary people should have been carrying guns in the street; the Edwardians were shocked rather by the idea of an armed robbery.

And from a current article:
For anybody who still believed in it, the Mumbai shootings exposed the myth of “gun control”. India had some of the strictest firearms laws in the world, going back to the Indian Arms Act of 1878, by which Britain had sought to prevent a recurrence of the Indian Mutiny.

The guns used in last week’s Bombay massacre were all “prohibited weapons” under Indian law, just as they are in Britain. In this country we have seen the irrelevance of such bans (handgun crime, for instance, doubled here within five years of the prohibition of legal pistol ownership), but the largely drug-related nature of most extreme violence here has left most of us with a sheltered awareness of the threat. We have not yet faced a determined and broad-based attack.

The Mumbai massacre also exposed the myth that arming the police force guarantees security. Sebastian D’Souza, a picture editor on the Mumbai Mirror who took some of the dramatic pictures of the assault on the Chhatrapati Shivaji railway station, was angered to find India’s armed police taking cover and apparently failing to engage the gunmen.


With Zimbabwe going into the toilet trap, with cholera now helping things along, Mostly Cajun takes note of what Mugabe and socialism has done to the place. I'll add, Mugabe lost the first election and(as I recall) made so many threats and screamed so much to people like Jimmy Carter that a second election was held. Despite the first having been noted a remarkably clean. And, of course, Mugabe won the second. Maybe this marxist jackass would have come into power later anyway, but still... I'd hope Carter felt shame for what he'd helped along here, but I don't think he's capable of either shame or thinking he ever did a thing wrong in his life.

Speaking of the son, somebody pointed me to this 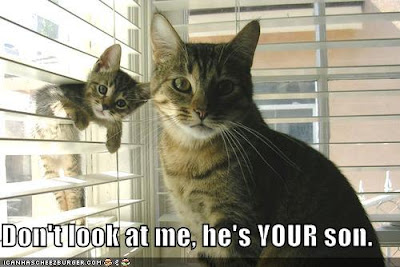 which does remind me of something; namely, his mother calling/writing me to note "Your son did/did not/won't (fill in the blank)." To a lesser extent there were "Your daughter" calls/e-mails, but for the most part it was son. The last while it's been "There's another box here for your son" when something he ordered arrived.

As an aside, this is another marker of how much things have changed. In WWII and Korea, a letter from a relative in the war zone was a happy thing, and you might get one fairly regularly- as in every few weeks- depending on where stationed, etc. Vietnam, pretty much the same. And so on, until now you can get e-mails from an FOB in Outer Bugtussle and an occasional phone call. Amazing, isn't it?

BooYah. The high point of my two tours was the one MARS call I ever got. God Bless our troops.

Damn right. Remember the video calls so troops could see the baby back home? Good things.

Fire, I have no doubt of it at all.