I know, it's the day before Christmas, good feelings and all,

but I still want to point out some of these people.

For instance, after The Obama's investigator(Comes with the Royal Seal!) investigated and said nobody on The Obama's staff did anything wrong, we still keep reading things like this:
In addition to talking with Gov. Blagojevich about who would fill President-elect Barack Obama’s Senate seat, Obama’s newly minted chief of staff had something else on his mind: his own congressional seat.

Just after accepting the top post with Obama, Rahm Emanuel discussed with Blagojevich the possibility of keeping his congressional seat “warm” for him for a couple of years, the Sun-Times has learned.

Emanuel expressed interest in returning one day to his elected position because he was on track to become U.S. House speaker, the Sun-Times previously reported.
Hmmm, I wonder if this last could have something to do with Pelosi basically telling him and The Obama to clear any talking to people in the House through her? "No surprises" I believe it was?

Here's what a 'journalist' has to say about Joe the Plumber being trashed:
WURZELBACHER: I just, you know, in general you can say the left pretty much shot me up, wouldn't you say?

ROBERTS: Well, I mean, you know, I guess when you entered the political fray, you've got to expect that some people are going to take some shots at you, you know, when you get out there and you enter into that political arena. It's a tough place to be. It's a little bit like a gladiator sport --
Let us point out- again- that this guy was in HIS YARD when The Obama came by and asked for questions. He asked a question, The Anointed One's answer caused a problem, and the media- and crooked officials- proceeded to trash him in every way they could. They spent more time investigating a guy who asked a question than they did on Obama over the previous two years(that they'd admit to, anyway). But, according to this clown Roberts, asking Obama a question means you've 'entered the political arena'.

Dr Blackmore said the "fundamental problem" facing the planet today is that "there are too many people". Professor Gray agreed. Then Dr Blackmore declared: "For the planet's sake, I hope we have bird flu or some other thing that will reduce the population, because otherwise we're doomed."
What's scarier than these morons? That there's a fair chance Obama's science adviser agrees with them.

These folks say that the primary reason for failures with the M4/M16 is incorrect/insufficient maintenance. Never having owned one, and having fired an AR15 on one occasion, I can only repeat what the son said a while back when I mentioned maybe getting an AR15: "If you can find one with a closed gas system in 7.62x39, grab it; otherwise, don't bother." Considering finding one with a closed system in .223 is both damn near impossible and very expensive last time I looked, I think I'll pass.

That's enough of that. I'm going to try to get in a festive mood, and have a talk with Security Staff so that, if Santa falls into the back yard, she won't bite his red-clad ass. 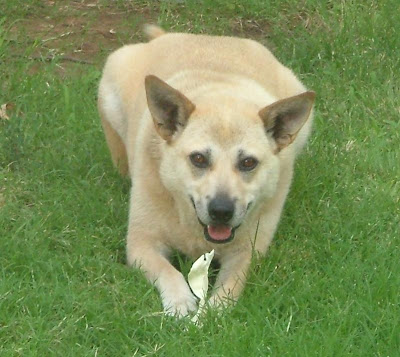 He sets foot here, he's after my rawhide; I'll bite him GOOD.
Posted by Firehand at 08:26

What's scarier than these morons?
Eric Pianka, for one...

On the M-16/AR series rifles: As a former National Guard unit armorer and 18 year soldier- are they more sensitive to fouling than the ideal? Yes. The AK will function more reliably than the M-16. BUT. With routine maintenance, the 16 is inherently capable of better accuracy compared to the AK. This does, however, require an operator with both the intellect and drive to learn both maintenance and shooting techniques optimizing the AR series' capabilities. Unfortunately, most American soldiers are for more suited for SKS levels of technology anymore.

One more interjection of personal opinion. Add a gas piston and 6.5 mm bore diameter to the AR type rifle, and you have a serious contender for reliability, accuracy, and killing. Damn shame economics and politics takes it out of consideration.

I'm going to narrow the focus of your post down, and just wish you and yours a very Merry Christmas!

I've never been able to justify the astronomic expense of a rifle built on the AR-15 platform. A few years ago I bought a Yugoslav SKS M. 59/66 then spent a couple of hours figgering out how to get all the excess machinery (bayonet and lug, grenade launcher and sight) off, then removing it. Once that was done, I ended up with a ten shot rifle in a fairly powerful (equivalent to .30-30) rifle half an inch shorter and half a pound heavier than a M94 Winchester carbine, and which will print ten shot groups of 4" at 100 yards. Match accuracy? Hardly. Good enough for almost anything else? Absolutely. Cost? Less than $80.00 (Eighty US dollars) including a MOJO back sight. Reliability? Think anvil. It simply works. Every time, clean or dirty.