Yard critters, and a change in the weather

One of the things that occasionally catches you by surprise is the amount of wildlife in this city. I've seen coyote crossing a major street at night, possums and raccoons galore(usually dead in the road), and squirrels everywhere. A few nights back when I came home from work I saw a dead squirrel in the street in front of my house. I figured I'd pick it up later and put it in the trash; it was after dark before I remembered, and when I stepped outside I heard a crunch, and found this in the yard: 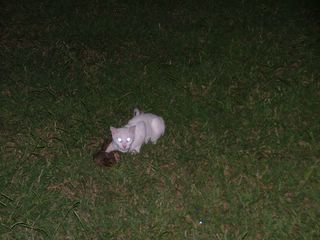 It had pulled the squirrel well away from the road and proceeded to dine. Notice the paw over it, the "It's mine, you can't have it!" expression? I talked to it a bit, and it didn't run away, and when I came back out to take this it didn't spook at the flash. In the morning all trace of the squirrel was gone, either eaten or carried away.

Speaking of squirrels, this relative of the deceased was in the back the next day: 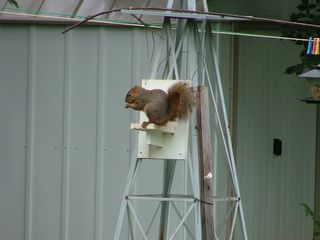 Yeah, I feed them. Not daily, every two or three days I put a bit out. I enjoy watching them, and the dogs like chasing them. Have you ever noticed that some of the little beasts like to play with dogs? They'll cross the yard in plain sight when they could go by fence or wires, then lead a chase. I saw one do this, and not five minutes later go back the other way. That time he damn near didn't make it, sailing through the fence maybe an inch in front of one of the dogs.

At the house I used to live in, one night the dogs were having fits, in that "Boss! Boss! There's something here!" way, so I went out with a flashlight. I couldn't see anything, until the light hit the top of a fence post, and the friggin' enormous possom perched there. Three directions he could have gone to get away, but there he sat, driving the dogs nuts. I finally put the dogs in the garage for a while and it left.

You'll see a lot of rabbits at times, too. I keep waiting for a wallaby or something to show up some evening.
Posted by Firehand at 19:48