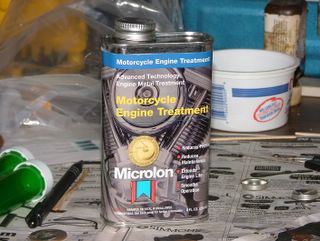 Over the past while I've read some accounts by people who used Microlon Engine Treatment, and a couple of weeks ago I ordered it for the bike. This afternoon put it in. It's a straightforward process; start with fresh oil and filter, warm the motor up, shut it off, shake the stuff up VERY WELL, add 2oz. to the gas tank, pour the rest into the crankcase(comes with a handy little nozzle to do it with), immediately start up and ride for an hour. That's it. The instructions say not to change the oil/filter for at least 1000 miles, as the stuff keeps working for a while. It also states not to add more than 20% of oil capacity with Microlon; if the amount needed is more than that you can do the treatment in stages.

The kit for my bike runs 24oz, and I ran the numbers three times(I'm paranoid about anything that might make my ride stall, melt down, explode or seize), and the 22oz left after adding some to the gas was just below 20%. So I filled up- which warmed up the motor- shook the hell out of the cans, poured the 2 into the gas, poured the rest into the oil, closed it up, got on, started and rode.

I started off with city streets, running along for about 20-25 minutes. After about 10-15 I noticed that the motor seemed to be running a little quieter, with no missing or any dramatic(i.e., flames from the exhaust, etc.) events. At about 25 minutes I got on the highway(I-240 if it matters) and ran it up to 60 for a few minutes. All well, cruising smoothly, so I put the tachometer on 4500 and checked the speed, about 62.5. After about ten minutes I noticed that the same RPM now had the speed closer to about 64, and that seemed to hold true on any level stretch. Hey, this ain't Mythbusters(dammit), I don't have a minicam or remotes to track speed/rpm, so this is my observation as I cruised down the highway, keeping track of the tach, speedo and the traffic(TRUCK!!), so exact readouts you don't get. However...

This highway loops around the metro area; I started south(tailwind), crossed east across the south side, then went north on I-35(headwind). I noticed that going into the headwind, 4500RPM gave me the 62.5mph I started with when I had the tailwind. It's not a precise measurement, but I did notice a bit of difference from before.

Time will tell, but the speed/rpm observations look hopeful, and the engine does sound quieter. Ogre seems to have had good results in his Jeep, and this seems a good start on the stuff in my bike. We'll see.
Posted by Firehand at 15:28

I'm pretty interested in this product. I look forward to your report on it.

I am NO mechanic, don't even play one on TV. Forgive my ignorance....

As I understand drive trains, you'll get the exact same speed out of the same rpm as long as you're in the same gear. It's a direct connection. What changes is how much gas it takes to get that many rpm.

The first time I used synthetic oil (over 25 years ago) I had to lower the idle speed on my Honda Accord because it went up so dramatically. After I switched back (the stuff was REALLY expensive back then) it would barely stay running at idle until I kicked it back up again.

I think you'll find that the speed thing was just coincidental. Keep tabs on your gas mileage and that will tell you something.

Oh, I agree it sounds weird. I'm going to run this tank of gas almost dry to make sure all the stuff added to the gas goes through before I tank up, and I'll start watching mileage then.