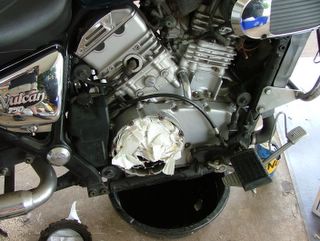 with paper towels stuffed in over the basket to keep it clean while I scrape off the bits that wouldn't come off easily. Which was about half of it. If it were cast-iron cases, no problem, use a brass scraper and slice it off, but even brass will scratch the aluminum cases, so mostly used one of those 'You Are Pre-Approved' fake credit cards companies keep sending me. Slow, but it makes no scratches.

So got that all cleaned off. Put in the new friction discs and the old pressure discs- they were in very good shape-, put the pressure plate on, set in the new springs, put in the bolts and start torquing them down. Get to the last bolt and snap, the damn thing broke. So pack some paper towel around that position, get the drill and get the broken section out, then desperately check the bolt/screw/nut bin. Where, lo and behold!, I had one machine bolt of matching thread. So cut it to length, put it in and torque it down, new gasket, cover, put threadlocker on the bolts and snug them down. Add new oil, start and run a minute, then top off the oil, and that's all done. 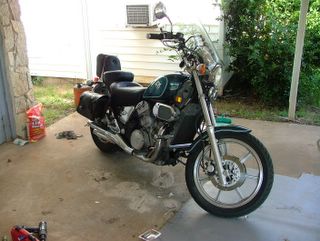 You can't see it but there's a drain pan under the back end where the final drive is draining so I can add new lube there(it's a shaft-drive). Once that's done, most of the maintenance it needed for the next while- a long while in the case of the clutch- is done.

After reading some accounts of how it had worked on their vehicles, I ordered a Microlon engine treatment for the bike. Hopefully tomorrow I can add it in, after which you're supposed to ride for an hour, so I'm hoping for nice weather tomorrow.

Now to add the lube to the final drive, and pick up all the mess.
Posted by Firehand at 13:48

Nice bike. Hope the weather lets you ride it soon.

Though if it turns out I did scratch it, and it leaks, I WILL be trying it

scratches on aluminum cases are the worst!!