Sometimes something unique comes through

and I get to take a good look at it.  And some pictures.  In this case, 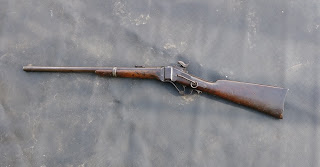 Still with the proper ringbar and ring for carry.

These were originally set up to use a .52-caliber bullet with a paper or linen cartridge, fired by either a percussion cap or use a mechanism to feed a sort of disc-type cap onto the nipple when you cocked the hammer.  After the Civil War a bunch of them were bundled off to Sharps with an order to convert them to the new .50 Government(more commonly known as the .50-70) cartridge; this is one of them.  The breechblock was modified to hold the firing pin, the hammer modified or replaced to work with the new block setup.

It's lighter than you might think, and balances nicely.  Has the standard for the time tiny little sights.

And, wonderful thing, I got to fire it.  If you want to shoot one of these, you'd have to roll your own.  The owner's loads were a 450-grain bullet over a light charge of 55 grains of 2f black powder.

To my thinking, if I had one of these, something like that is what I'd make up; 55 grains and it roared, recoil was there but nothing bad.  This thing with 70 grains- or as close as you could get in with modern cases- would speak LOUDLY.  On both ends.

It's a really interesting feeling to hold something made and used during the Civil War and after, and fire it.

I really need to win some lottery.
Posted by Firehand at 15:11