I had seven rounds loaded using the formed .32-20 cases, and ten using standard .30C cases.  The Lyman manual showed the starting load for a 115-grain cast bullet as  3.1 grains of W231, this being a lighter bullet I started with 3.2.  Since the case mouths had to be flared a bit to start the bullets I used the sizing die to make a taper crimp, just enough to remove the flare.  Offhand at ten yards 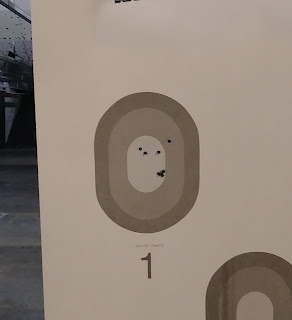 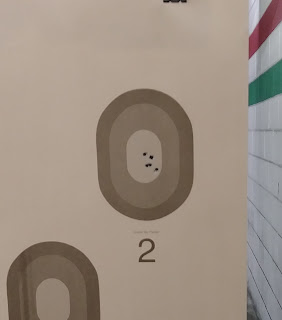 Don't know if the pistol liked these better, or I'd just settled in.  I really need to try this when I can sit down and put it on a rest.  Just to try, I ran the target out to 15 yards and used the rest of them there. 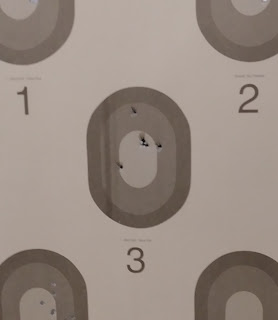 Yeah, really need to do this with a rest and better light.

As expected, recoil was quite mild.  The .32-20 cases just dropped out of the chambers, the .30C cases, several dropped out, the others needed a touch from the ejector rod.  Several of both shows signs of not having fully sealed against the chamber walls, so a bump up in the charge seems called for.

On the cases, the .32-20, after sized, were exactly at the max length for Carbine, so I left them that way; the bullet had to be seated with the crimp groove covered for them to fully chamber.  The .30C cases were just above minimum length(1.281" to be specific) and required a slight push on the base to fully chamber, I'm guessing from the bullet shape.

If you've got one of these that the cases stick badly in(common in some from what I've read) the modified cases might be a way to deal with that, at least with cast loads, they're thinner construction so I wouldn't want to try to use them with full-power jacketed loads.  If that's not a problem the standard cases seem to work well with this bullet and load.  Some further experimentation is called for next time I can borrow it.